Peter Island British Virgin Islands. If you are heading to the BVI for your yacht charter, chances are you will spend one night at an anchorage here. I find it adds to the enjoyment to know a bit of the history on your charter yacht vacation.

Peter Island has quite the history!

In the 17th century, a small German state with Berlin as the capital started a business in trading slaves and needed a base in the Indies.

This state was Brandenburg. They were allies of the Danes and given the right to establish a plantation and warehouse on St Thomas in the USVI.

They never did develop the estate, and this created friction, so they looked around for another island.

In 1690 they occupied Peter Island, which then had no inhabitants. They wanted to build a large settlement and knew that they would need several forts to do this. They not only built forts but also slave pens on land.

Who was Peter Island named after?

Pieter Adriensen gave his name to the island. Pieter’s brother was Abraham Adriensen, the Patron of Tortola under the Dutch West India Company in the early 1700’s.

Peter Island was unsuitable for sugar cane, and in the mid-1700s, a few planters with a few slaves left Tortola for Peter and planted cotton. Planting cotton was moderately more successful, and the operation expanded to a degree.

In 1756 there were five small arms on Peter Island. The islanders asked for an additional 6 and 2 cannons. They did not receive them.

John Bethell was a planter on this island in the 1770s, and in a dusty attic back in England, papers were found telling stories of the island.

John had come to Tortola from Barbados in his early twenties and married an older woman.

Shortly after their marriage, she found out that he was having an affair with a beautiful mulatto girl called Princess, which the wife promptly sold to a Planter on Peter Island.

When John came into his inheritance, he purchased the plantation on Peter Island and freed his beloved Princess.

The first religion on Peter Island was Methodist, and back in 1796, preachers visited the island regularly.

In 1806 a visitor ( Captain Thomas Southey) described the island as ” a kind of Robinson Crusoe Spot, where a man ought to be a farmer, doctor, carpenter, fisherman, planter, everything himself. The owner’s house has only the ground floor, a roof of shingles projects 6 or 8 feet beyond the sides, like a Quakers hat: not a pane of glass in the house, only shutters for the apertures.

In the center of the drawing-room or hall, or best room, were tied up ears of Indian corn, on a chair lay a fishing net; in one corner hung another, a spyglass, a fowling-piece, chairs, looking glass and pictures of the four seasons composed the furniture.

The library consisted of a prayer book, the world Almanac, and one volume of the Naval Chronicle. On the left hand was a room, with a range of machines for extracting the seeds from the cotton.

Round the house was an abundance of goats, turkeys, fowls, a bull, cow, pigs, dogs, and cat.

The old gentlemen featured a large wide-brimmed white hat, which appeared to have been in use for half a century; a white night-cap covered his bald head; his blue jacket had lapels buttoned back; his duck waistcoat had flaps down to his knees; the trousers were of the same material as the waistcoat.

The man leading this isolated life, with only his old wife, who looked more like an Egyptian mummy then anything human, was worth 60,000 pounds; he had lived twenty years on that small island and twenty upon Tortola.”

The end of the slave era marked a decline, and afterward, Peter Island returned to its primitive state.

The entire ship became the premier wreck dive in the Caribbean after floundering off Black Rock on Salt Island.

The ruins of the Coaling Station and a Great House can still be found in the area by those in the know.

In 1891 they did not separate it down and listed it as Salt Island and Peter Island having 99 black people between them.

As of 1911, Salt and Peter had 94 people; 42 of these were from Peter 2 were of the Anglican religion and 40 Wesleyan. Fourteen could read and write; nine were black and 29 coloreds.

At the beginning of the 20th century, some agricultural experimentation happened on the island, but in 1916 a horrific hurricane destroyed everything.

In the early 1920s, small tobacco plantations were planted, as well as the Palm Trees at Deadmans Bay

About that time, a gentleman called Brunial Bruce was growing tobacco on the island, and he had a small cigarette and cigar company in Little Harbor that he exported to Anguilla, Antigua, and other down island places.

In 1930 a retired British Diplomat John Brudenell-Bruce built a reasonably large house on Peter Island. He lived a simple life on the island and, in the 50s, became a member of LEGCO and moved to Tortola. His daughter opened the first gift shop in Tortola in the early 60s, and it is now known as Little Denmark.

When he lost market share, he sold his land and buildings to Mr. Percy Chubb. The sale was in the early-’60s, and the family spent part of every winter at Little Harbour.

In an email, I received this note from one of Mr. Chubb’s sons with a couple of corrections to my previous post.

“We watched its popularity, and the popularity of charter sailing, grow from one or two boats a night to thirty or forty ships overnight. Despite the occasionally tiresome disturbance of our peace, we derived a good deal of pleasure watching, and hearing, from the house on the top of the hill, as amateurs trying to anchor in a harbor with swirling winds banged into each other and cursed.

But Dad never “retired there” and there was no discord in the family about the sale. A lot of sadness, because it was a remarkable place to be able to stay. Expensive to maintain, though, as one might imagine, and none of the kids could take it on.

Besides the cost, my mother felt that she was getting too old, and her friends were getting too old to have the only medical access be by boat from Road town in case there was a problem. The last Christmas we spent there was in 1985.

Thanks for the chance to revisit what was a paradise for me in my teens and twenties.”

Mr. O Neal from Tortola started buying land there about the 1920’s and offered employment to Peter Island residents raising sheep, cows, and goats for export.

He also cultivated bananas, Tania, cassava, and potatoes that were shipped to Tortola and exported to St Thomas.

By the 1950s, the Lafontaine family built the Sprat Bay fishing business into quite a large one, and you could see many seaplanes in Great Harbor from all over the Caribbean landing to buy fish.

The LaFontaine family came from Canada.

Conrad Smith later owned that 15 acres, blind, he still managed to tie up tenders from the large yachts on shore and make a dollar or two as they walked over to Peter Island Resort.

Conrad lived in the old Lafontaine house with the date in the cement being June 17th, 1958

Rumor says that they had resisted all efforts to sell to Peter Island Resort. There are also the ruins of a small church and graveyard on the west side of Sprat Bay.

Torolf Smedwig, a Norweigan Millionaire, purchased 500 hundred acres of land in 1968. He owned the largest sardine packing plant in Norway, as well as oil explorations in Oklahoma.

With there being so little infrastructure here it made sense to have the chalets prefabricated in Norway.

Accompanying all this was 20 Norwegian craftsmen and workers, who would work with about 30 island workers.

Dredging Sprat Bay made it deeper and reclaimed land for the resort to sit on.  All the A-frames, the pool, the lobby, bar, dining room, and hotel offices were all built on reclaimed land.

The A-Frames only took about ten days to assemble on-site.

Water cisterns had been built all over the island, but water still had to be barged in from Puerto Rico!

In 1977 Mr. Smedvig’s health was failing, and he returned home to Norway dying shortly after.

Peter Island Resort was purchased by two gentlemen who had founded AMWAY Corporation in the states. Mr. DeVos and Mr. Van Andel put a lot more time and money into bringing the resort to its potential.

After Hurricane Hugo, with 130 mph winds, all the flagpoles were gone. Hugo blew away the 600-foot seawall Therefore giant breakwater boulders hurled themselves into the swimming pool.

Deadman’s Bay had all but vanished and therefore was reclaimed by the Caribbean Sea.

Perfect for your luxury yacht vacation! Because it is one of the largest islands in the British Virgin Islands with a small amount of infrastructure on land, there is no shortage of excellent snorkeling, SCUBA, and water sports anchorages. The views of the area are magnificent.

The last hurricane thinned out most of the foliage and, it has brought to light NEW ruins for you to explore.

Little Harbour- Home of the ruins of the Percy Chubb house

Cay Cay- The second reincarnation of Willy T’s floating bar was placed here after hurricane Irma after landing upon the land of Norman Island. We had a good fortune this summer to watch it go down.

How do I book a Peter Island Yacht Charter? 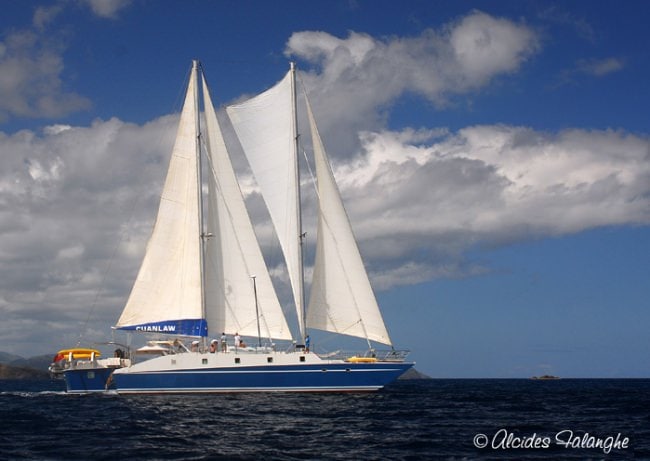 Looking for more Peter Island yacht charter options? No problem! Use our yacht search to find more and fine-tune your perfect Caribbean vacation.