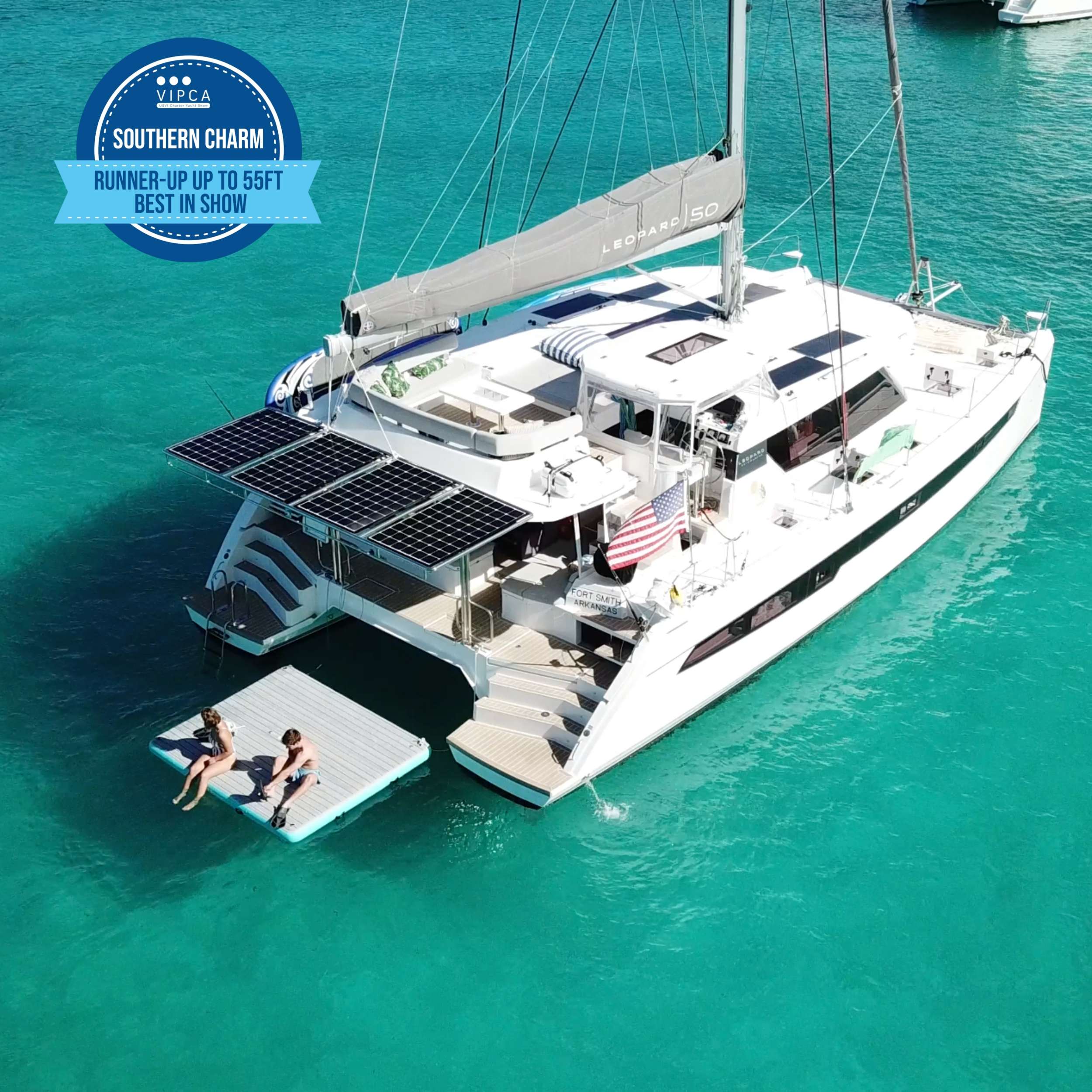 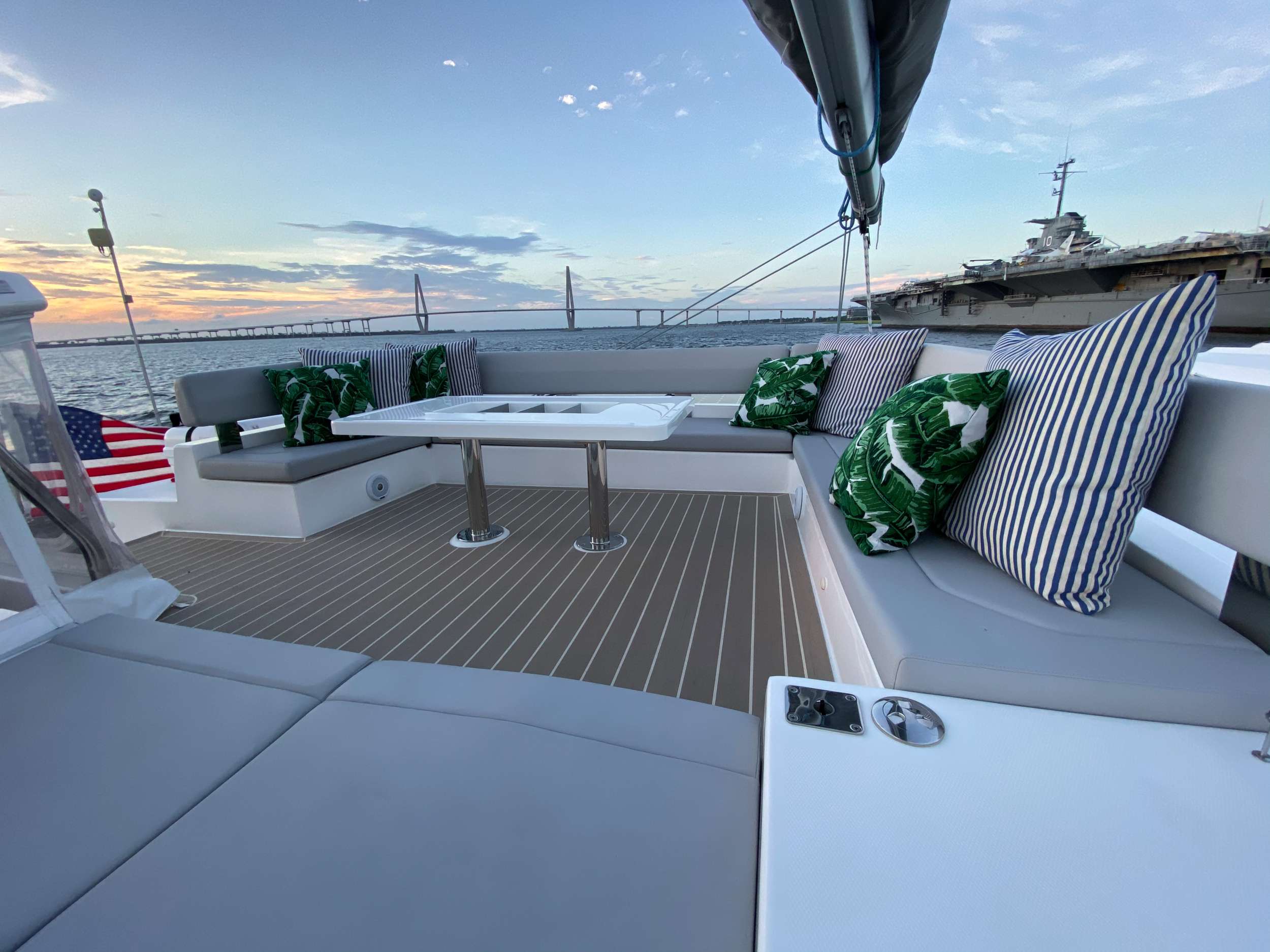 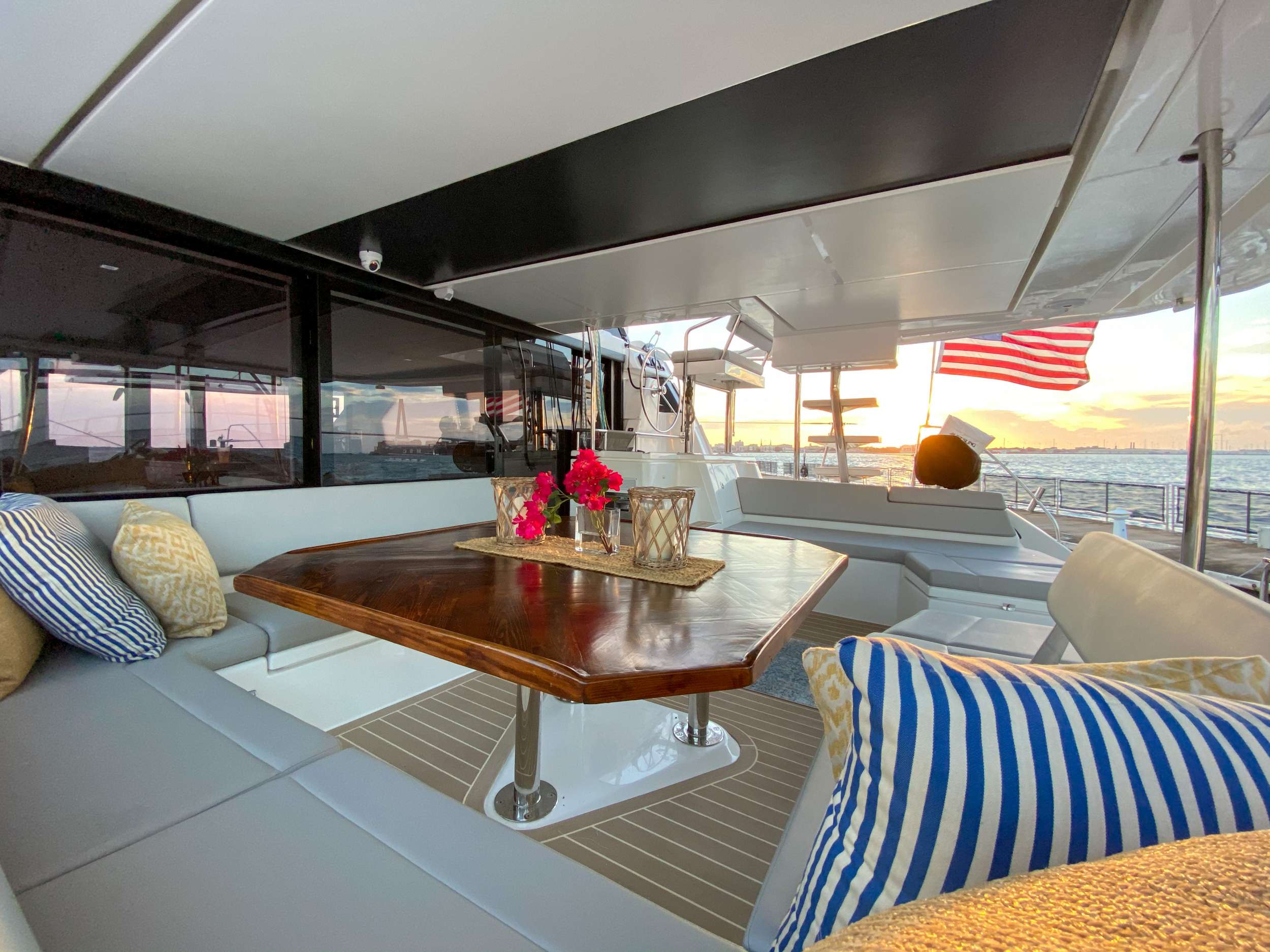 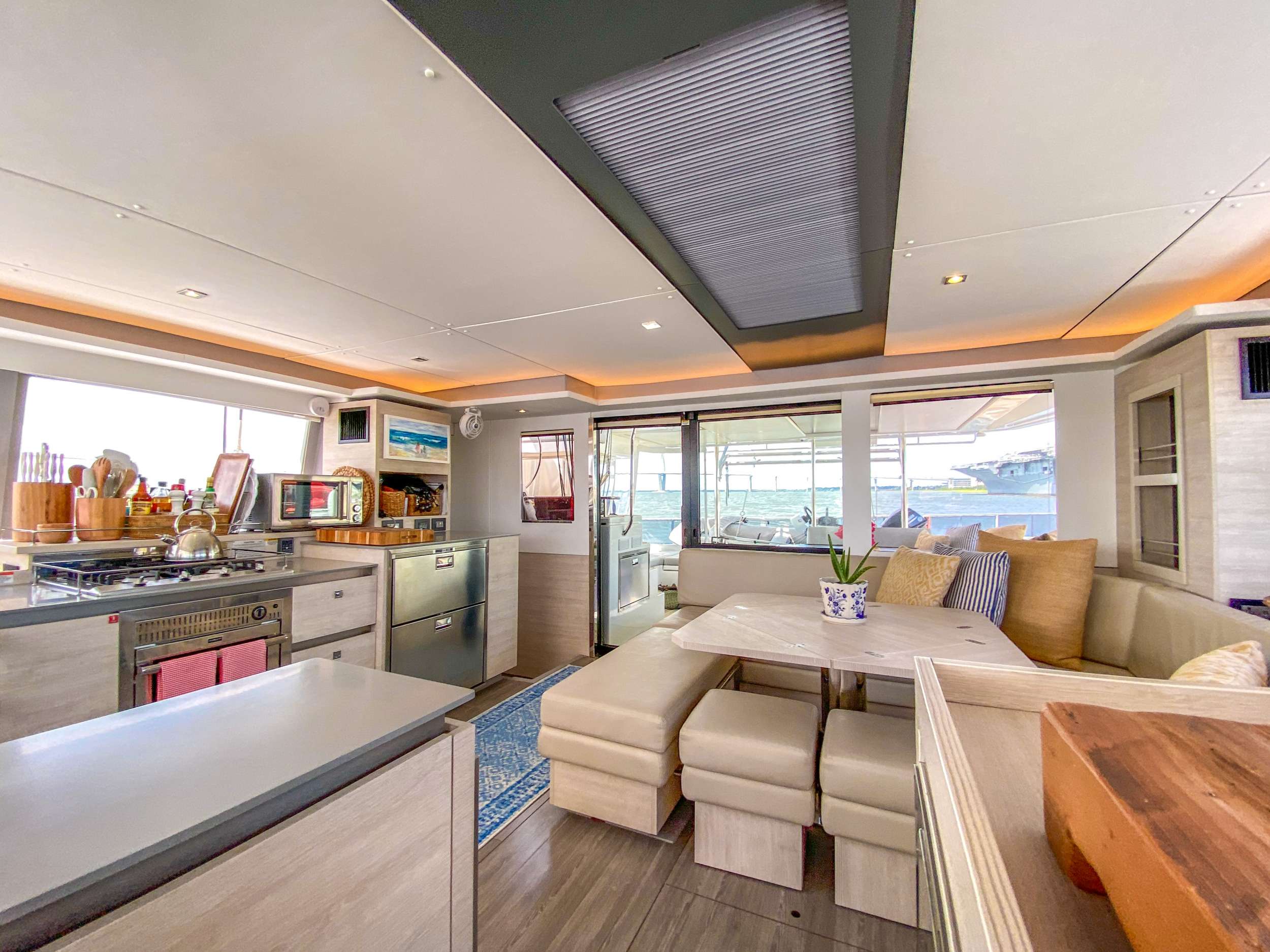 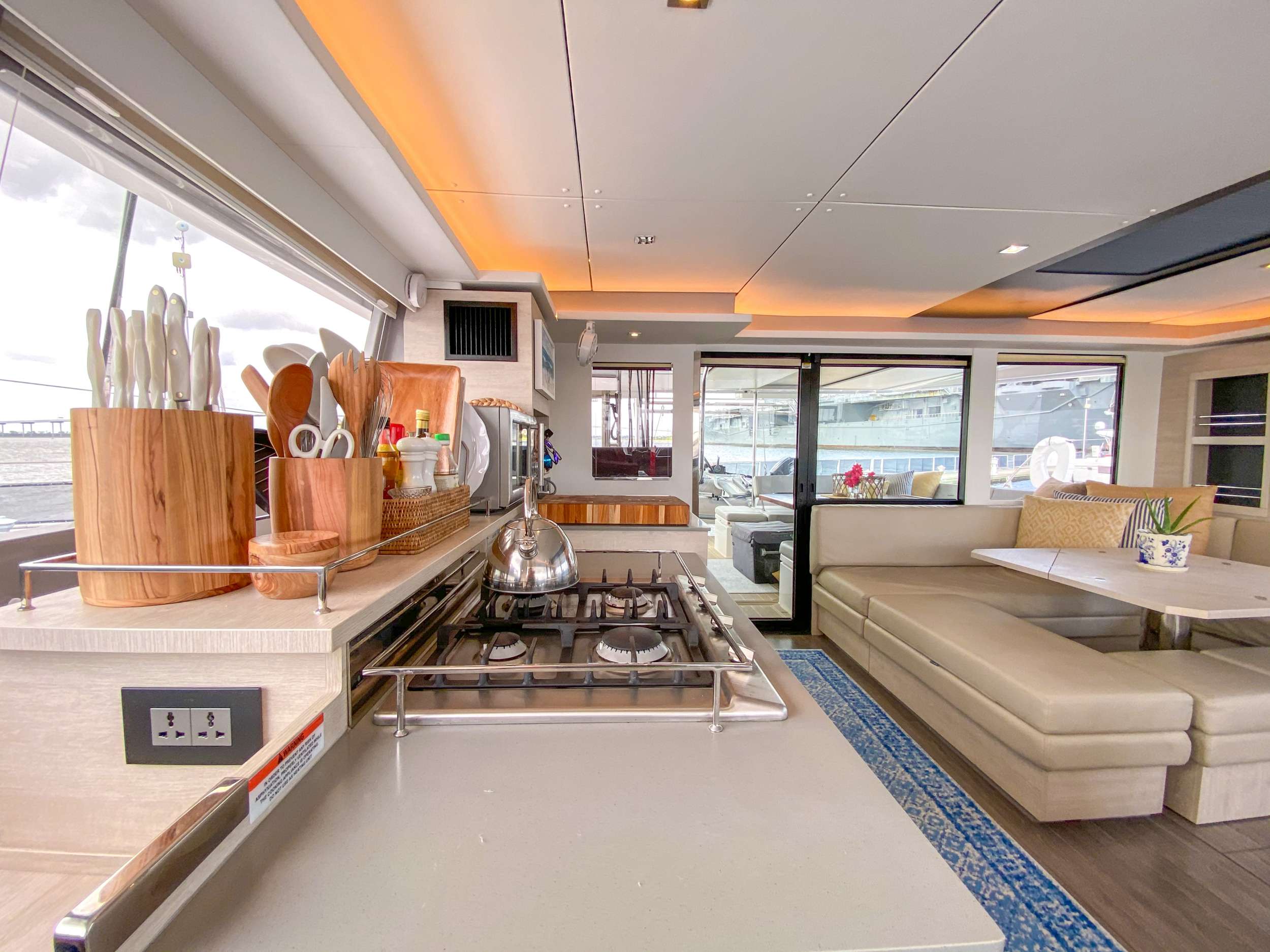 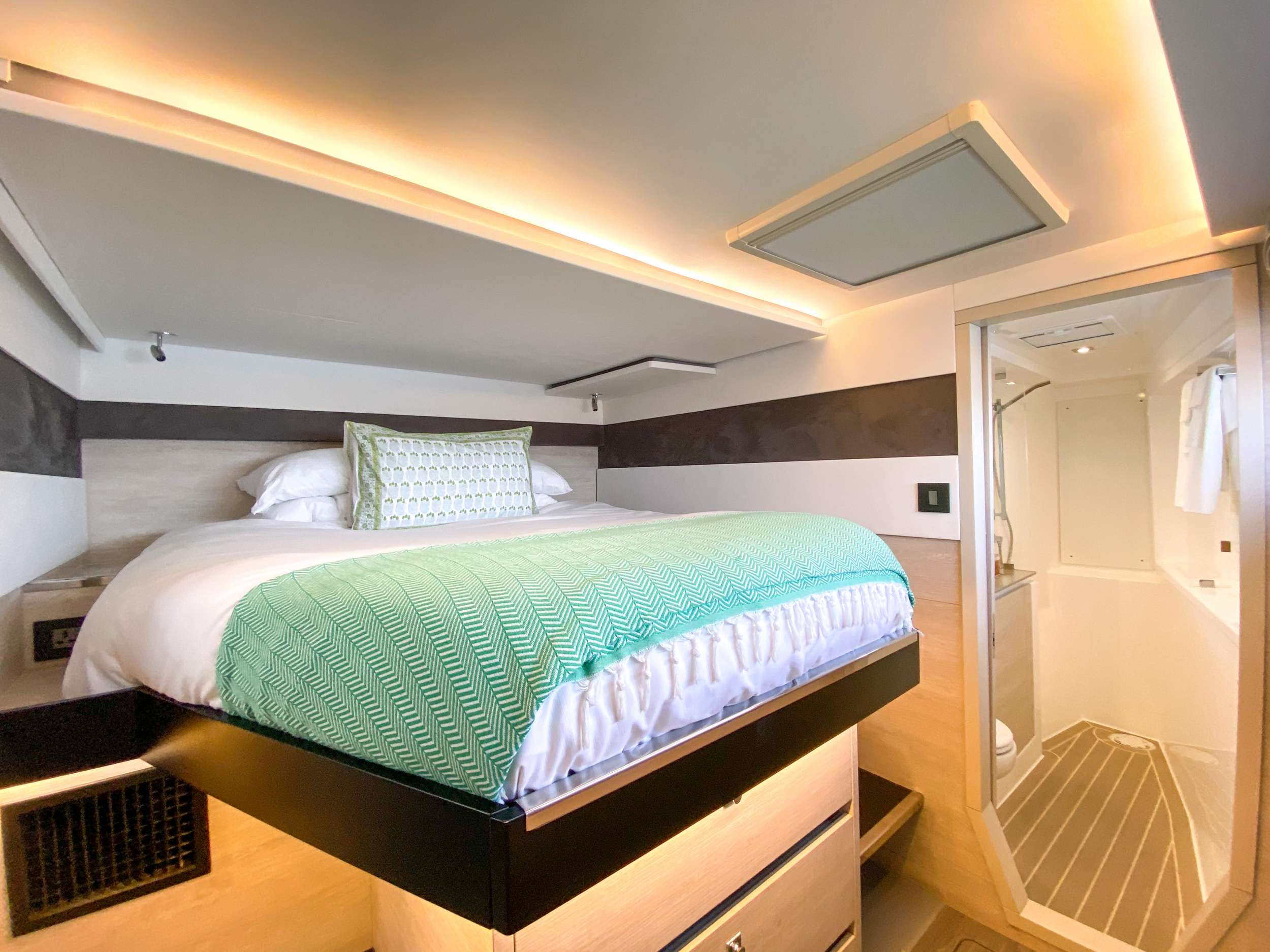 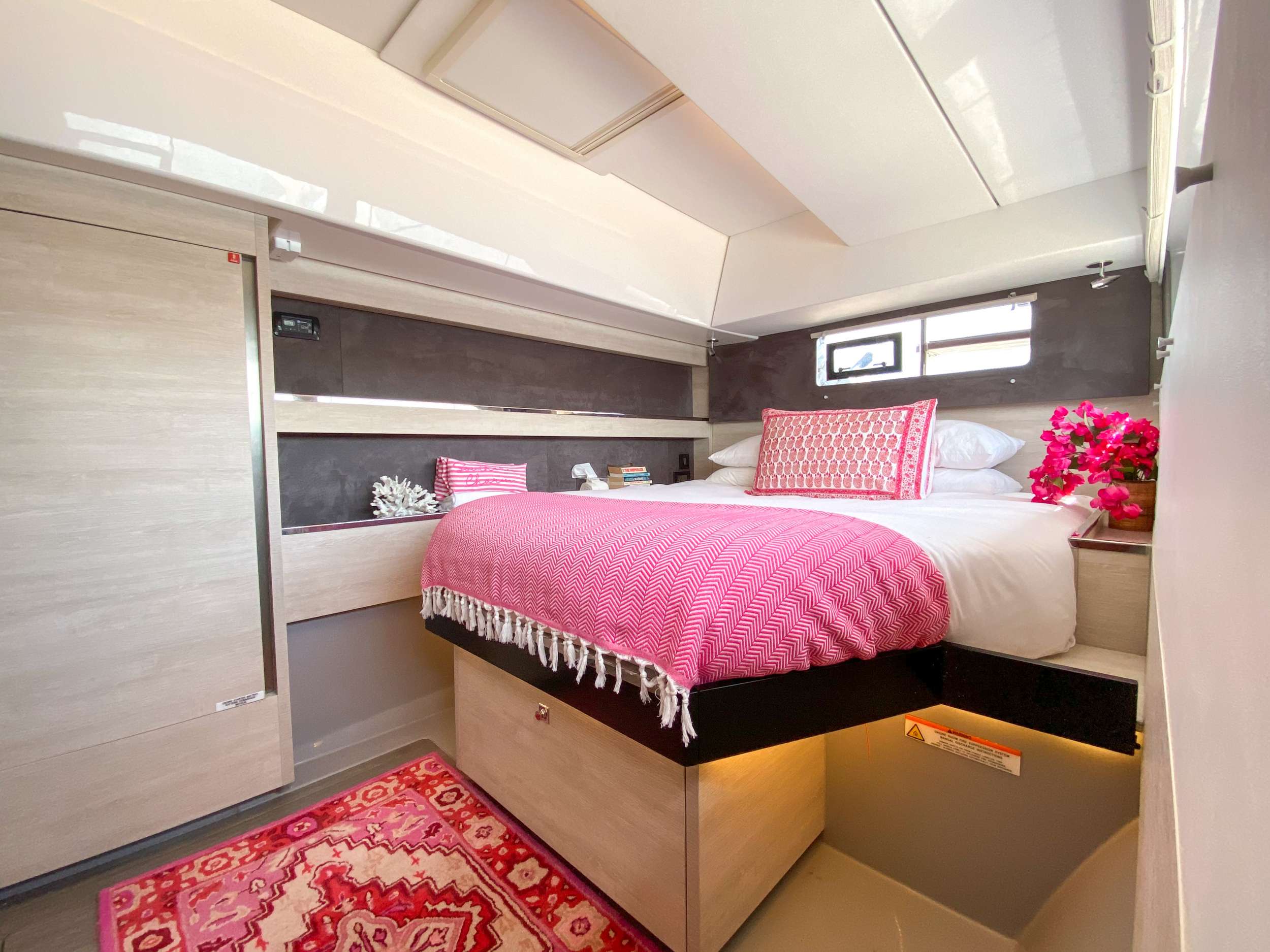 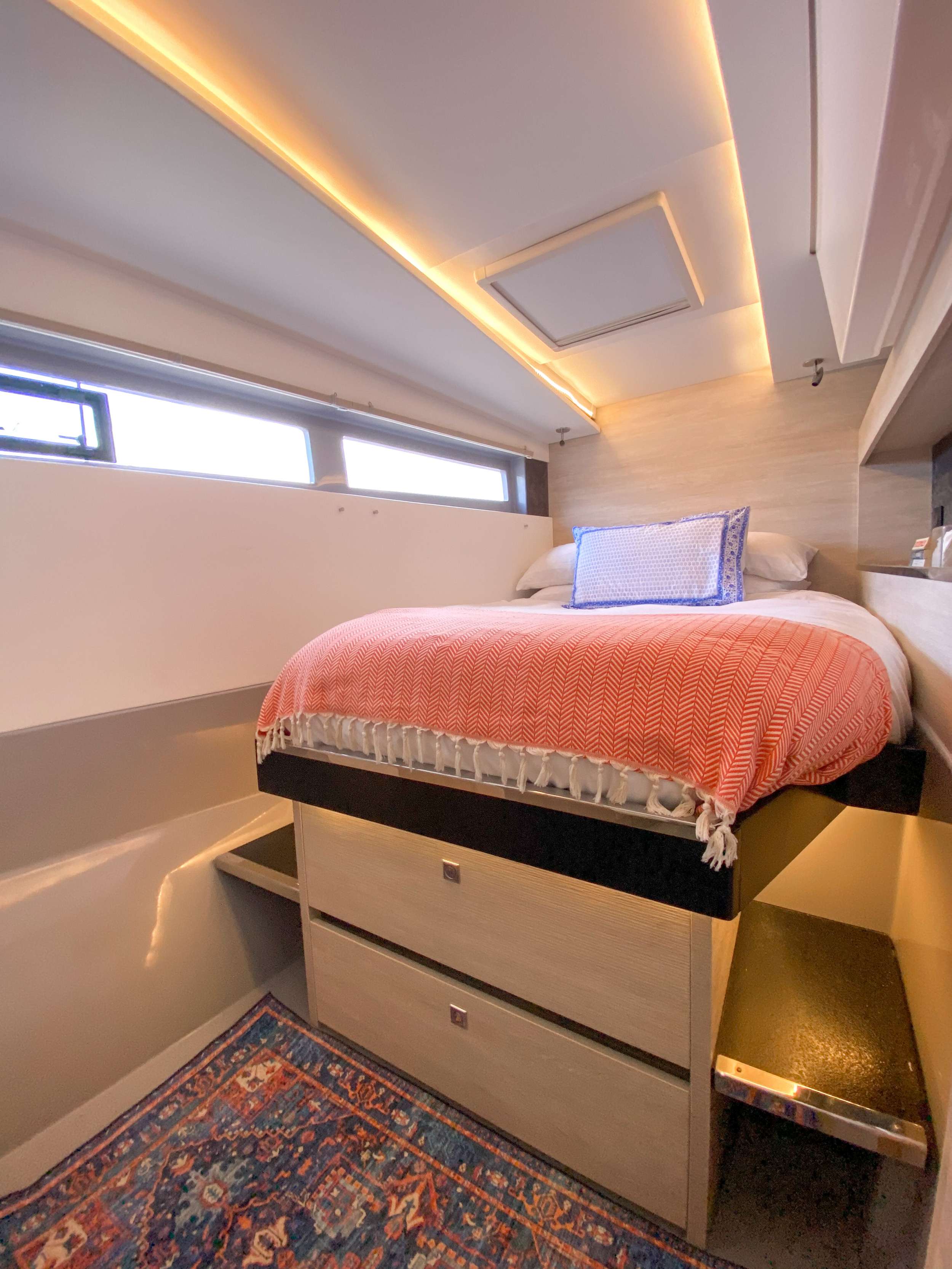 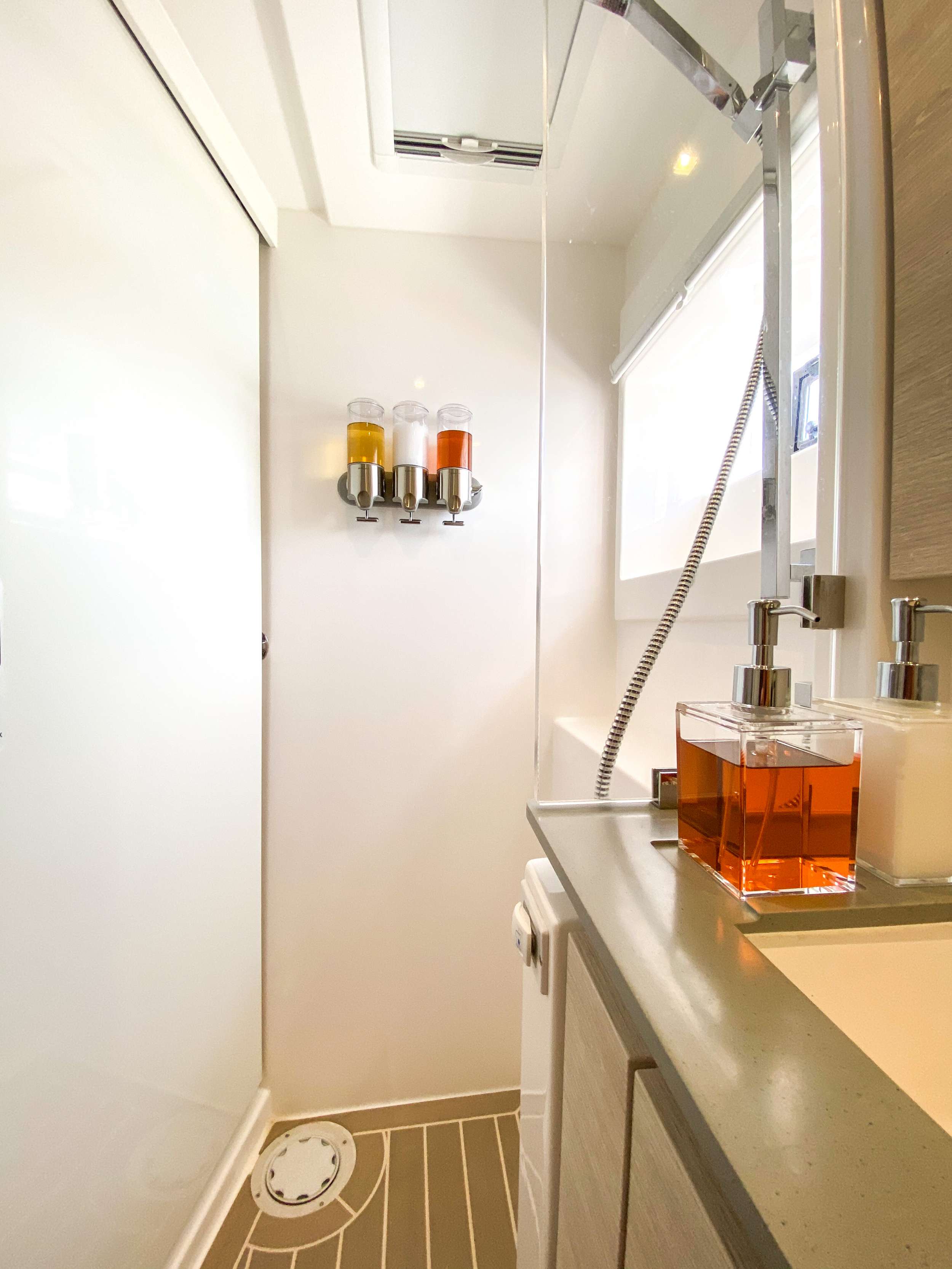 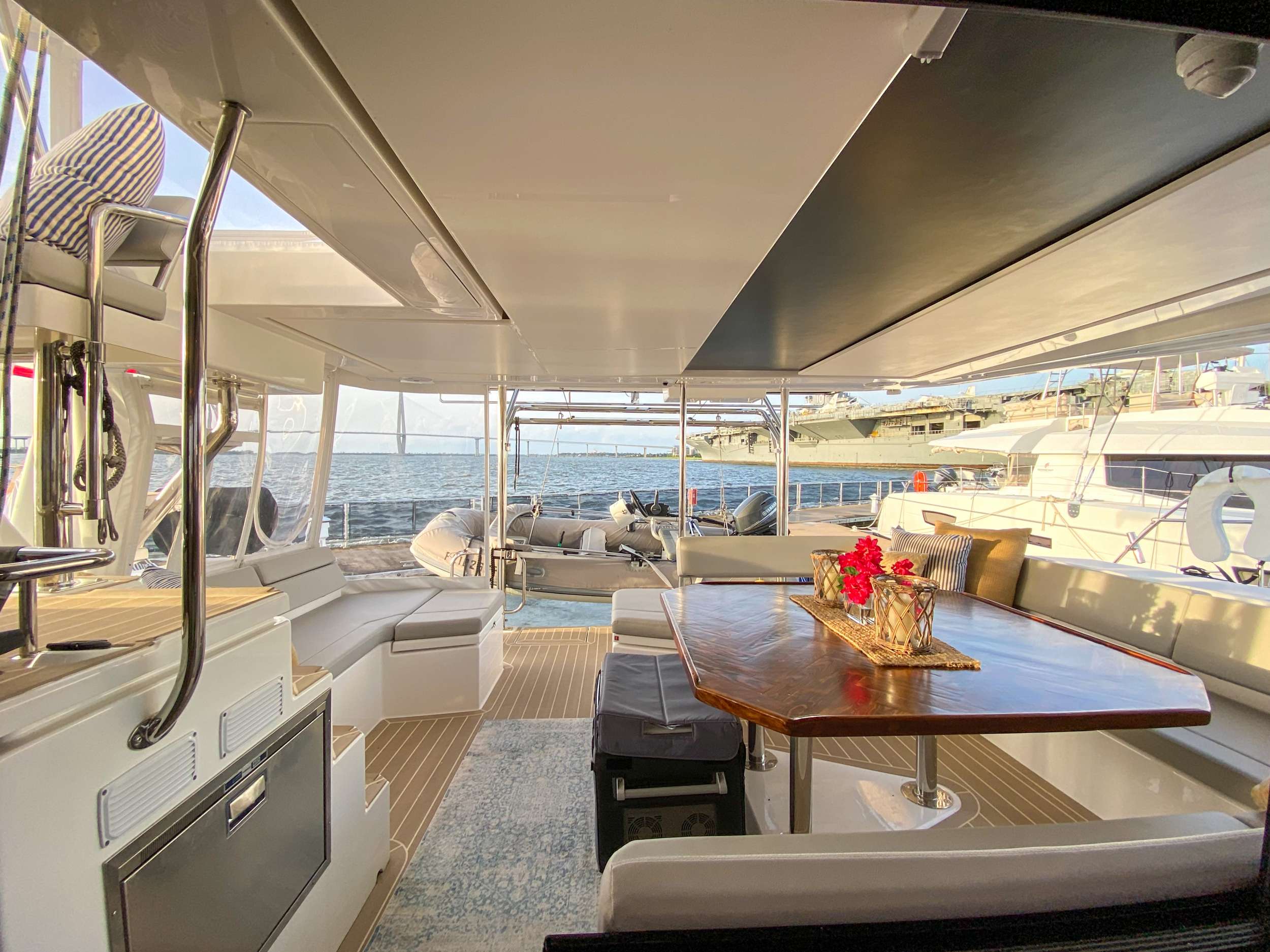 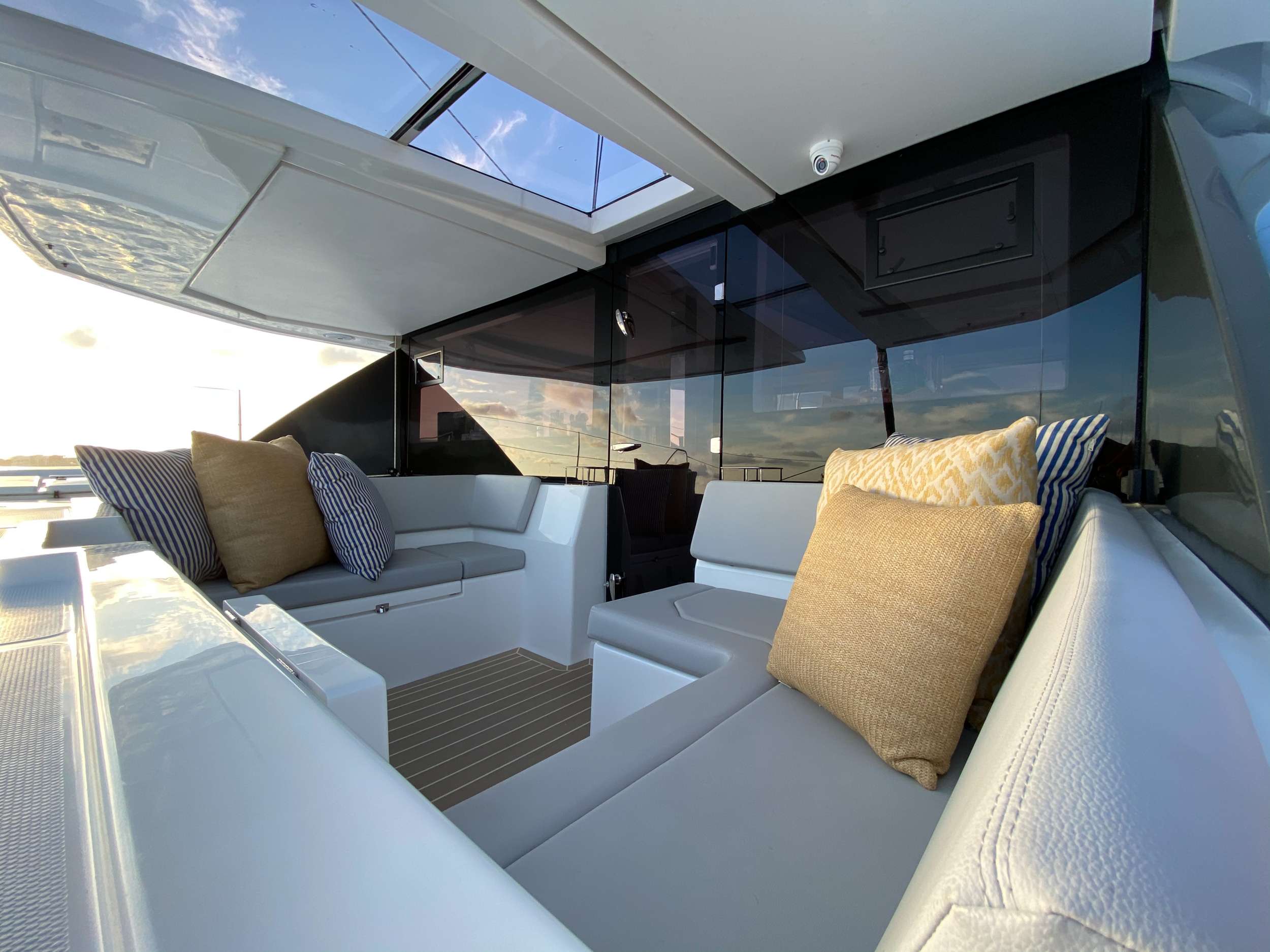 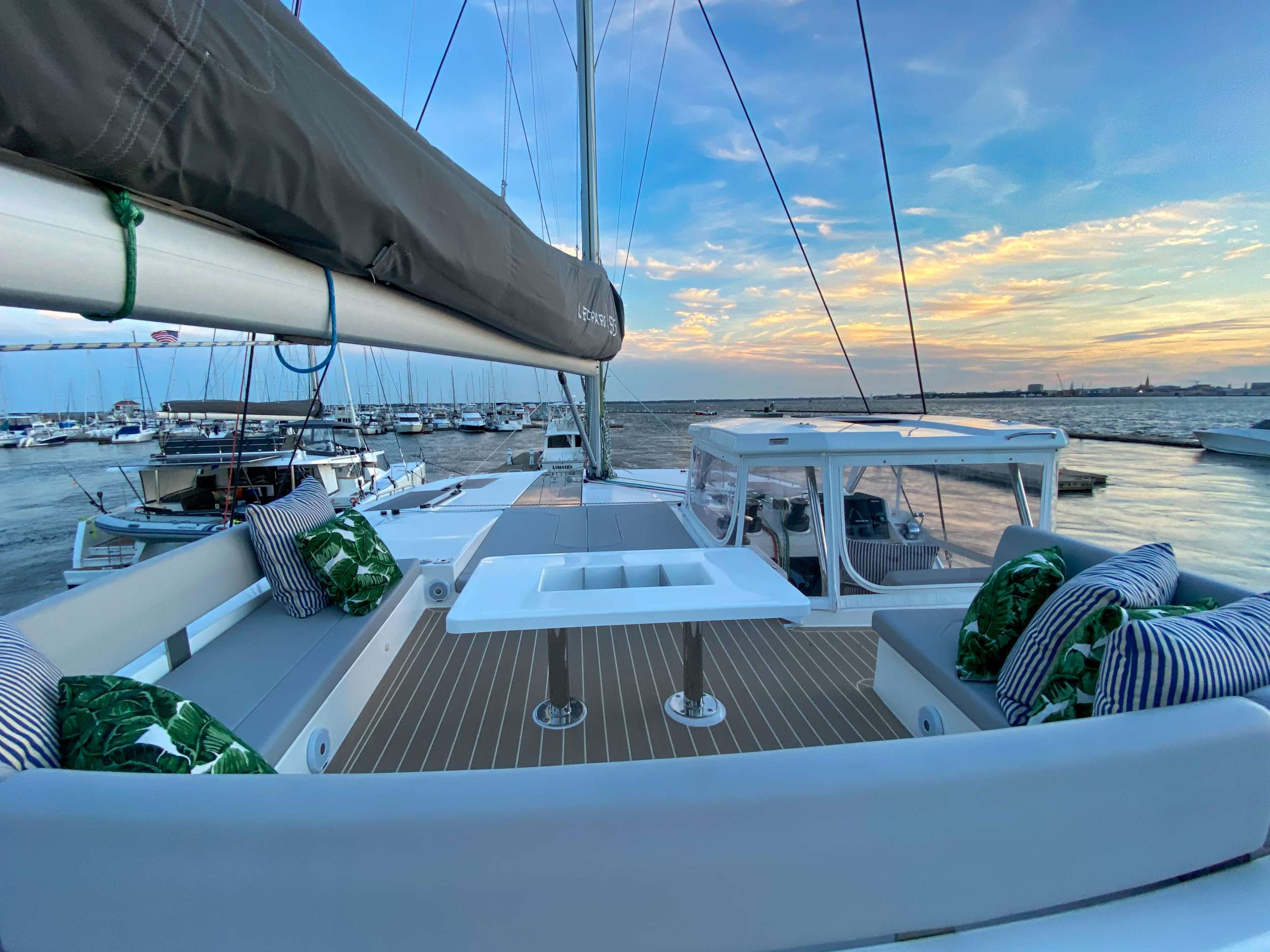 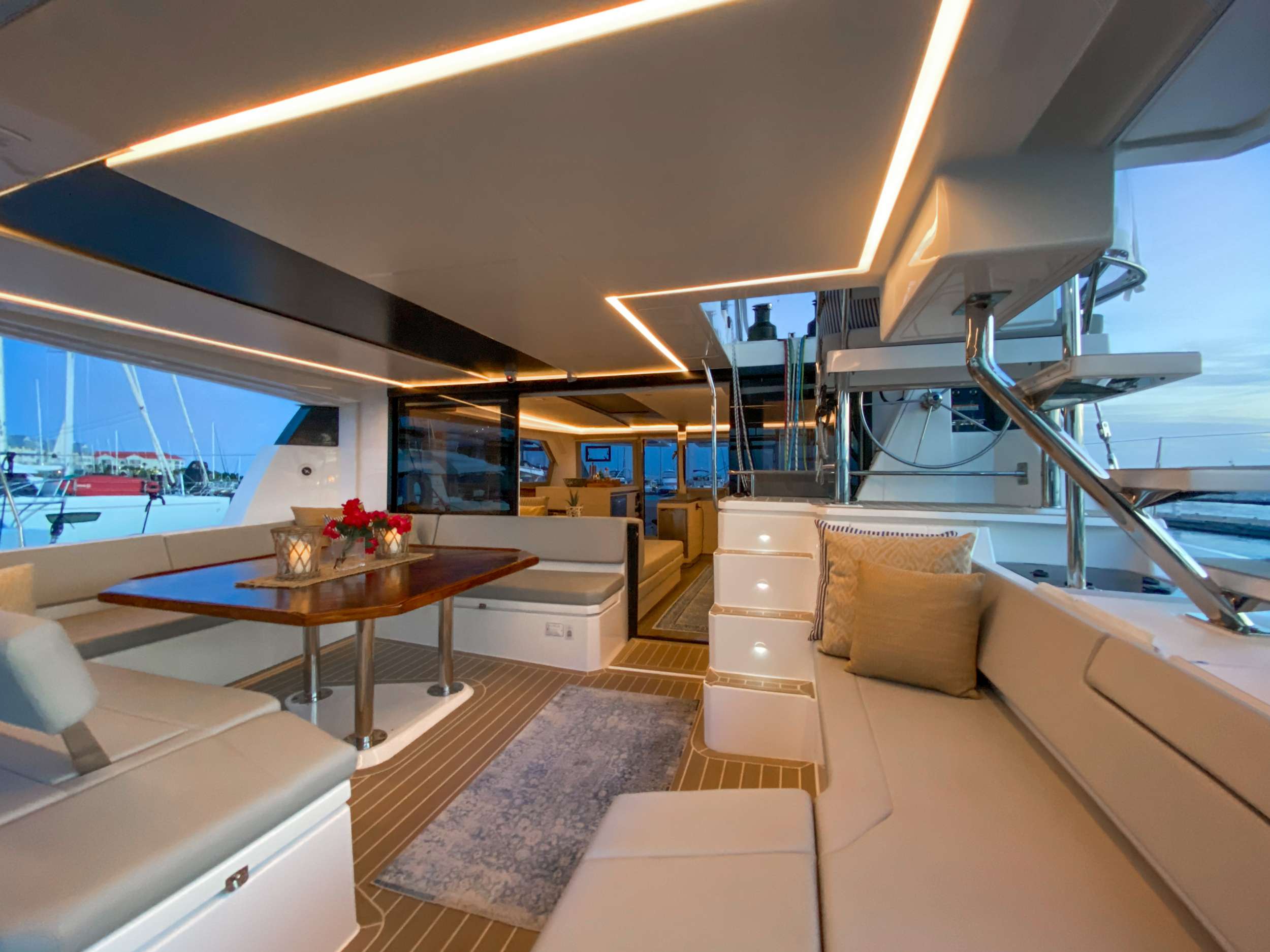 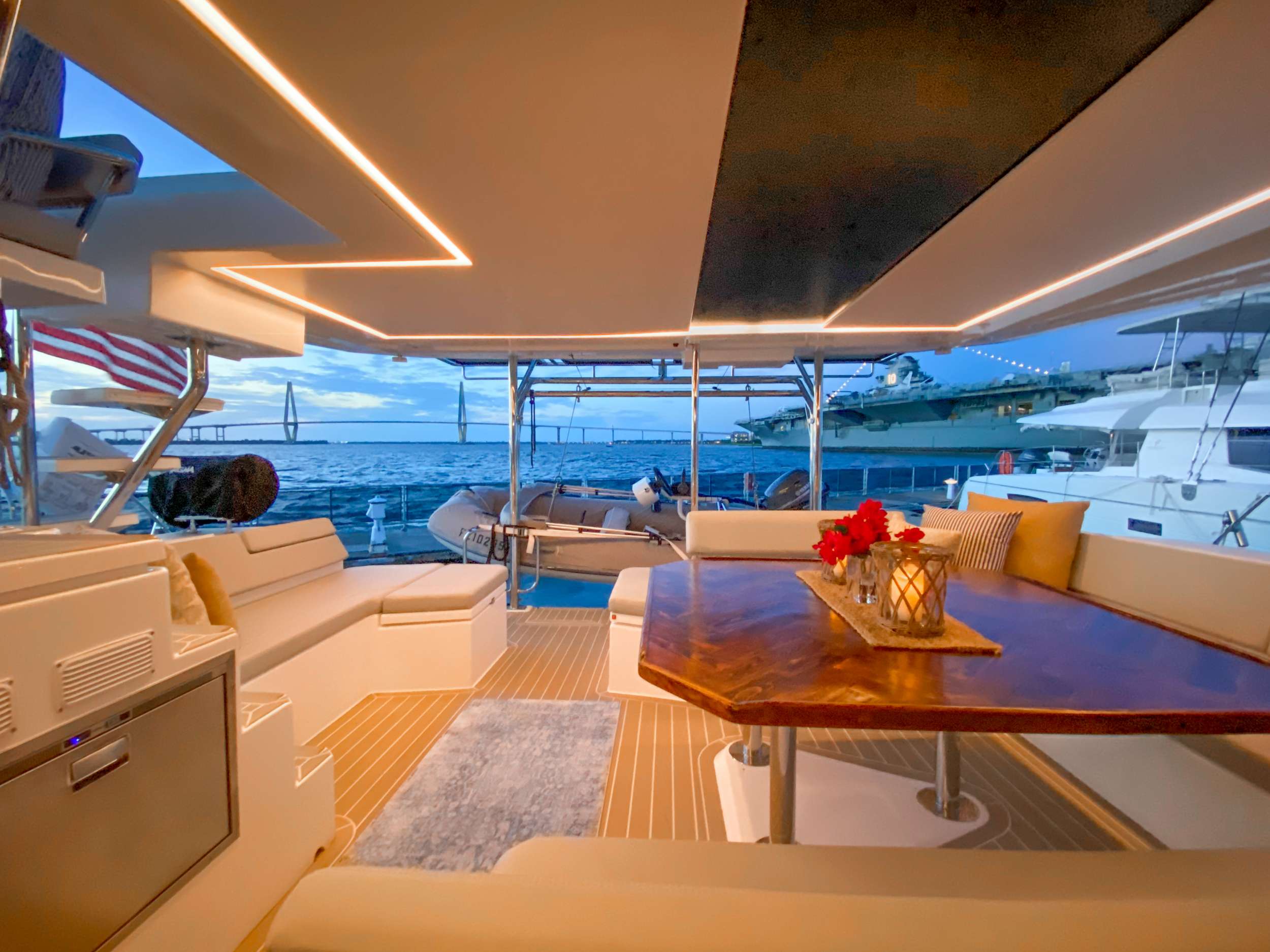 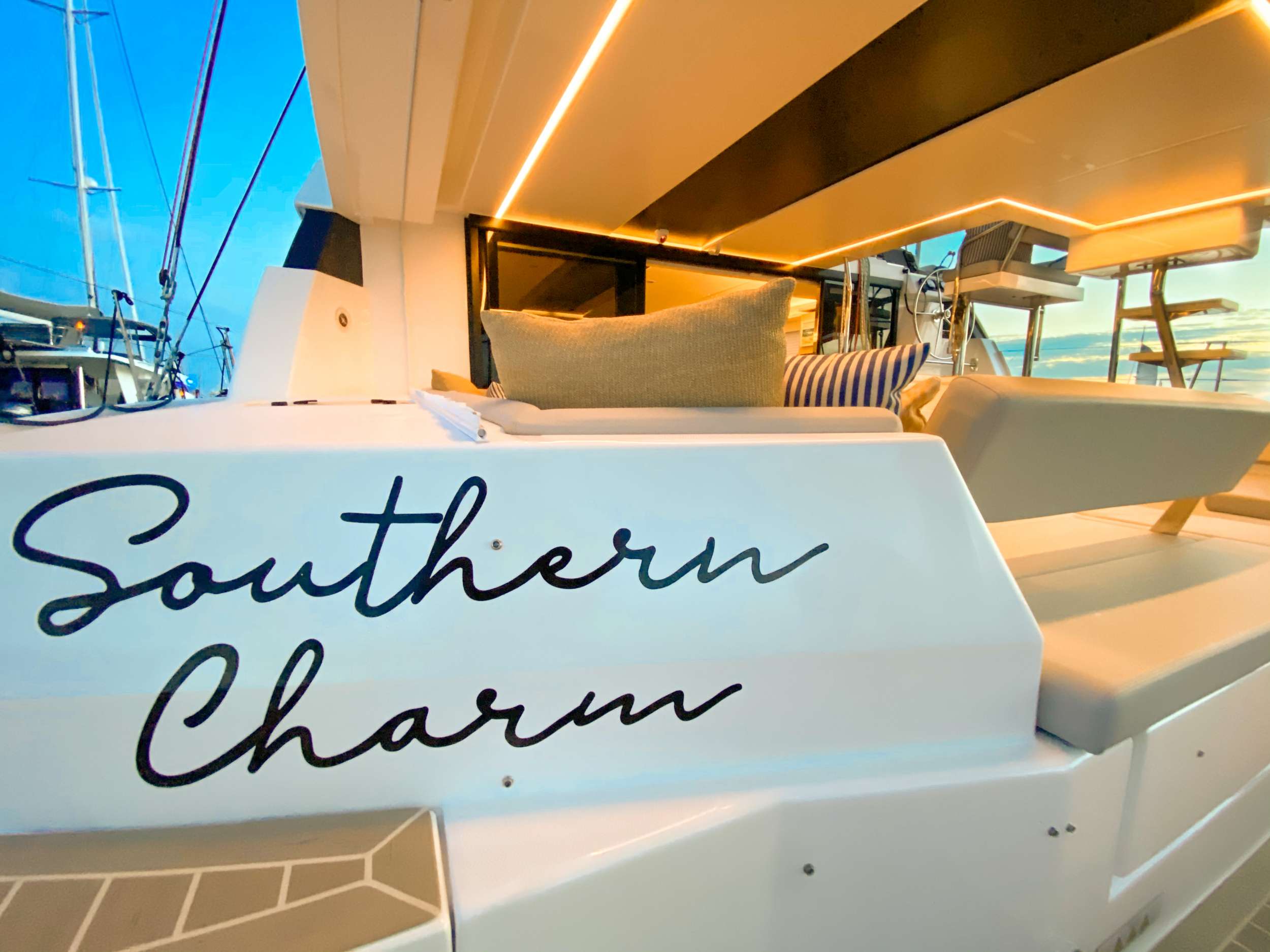 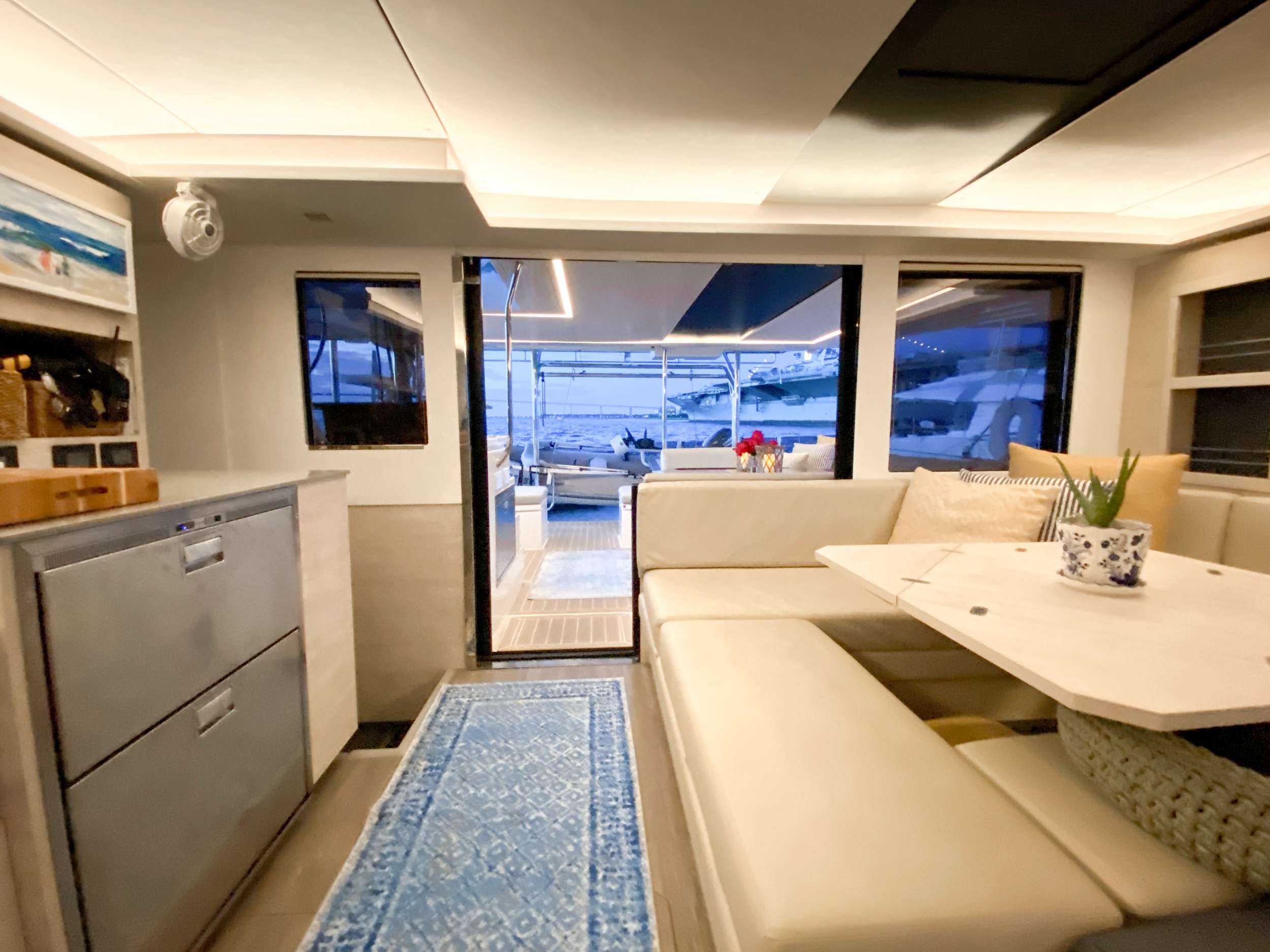 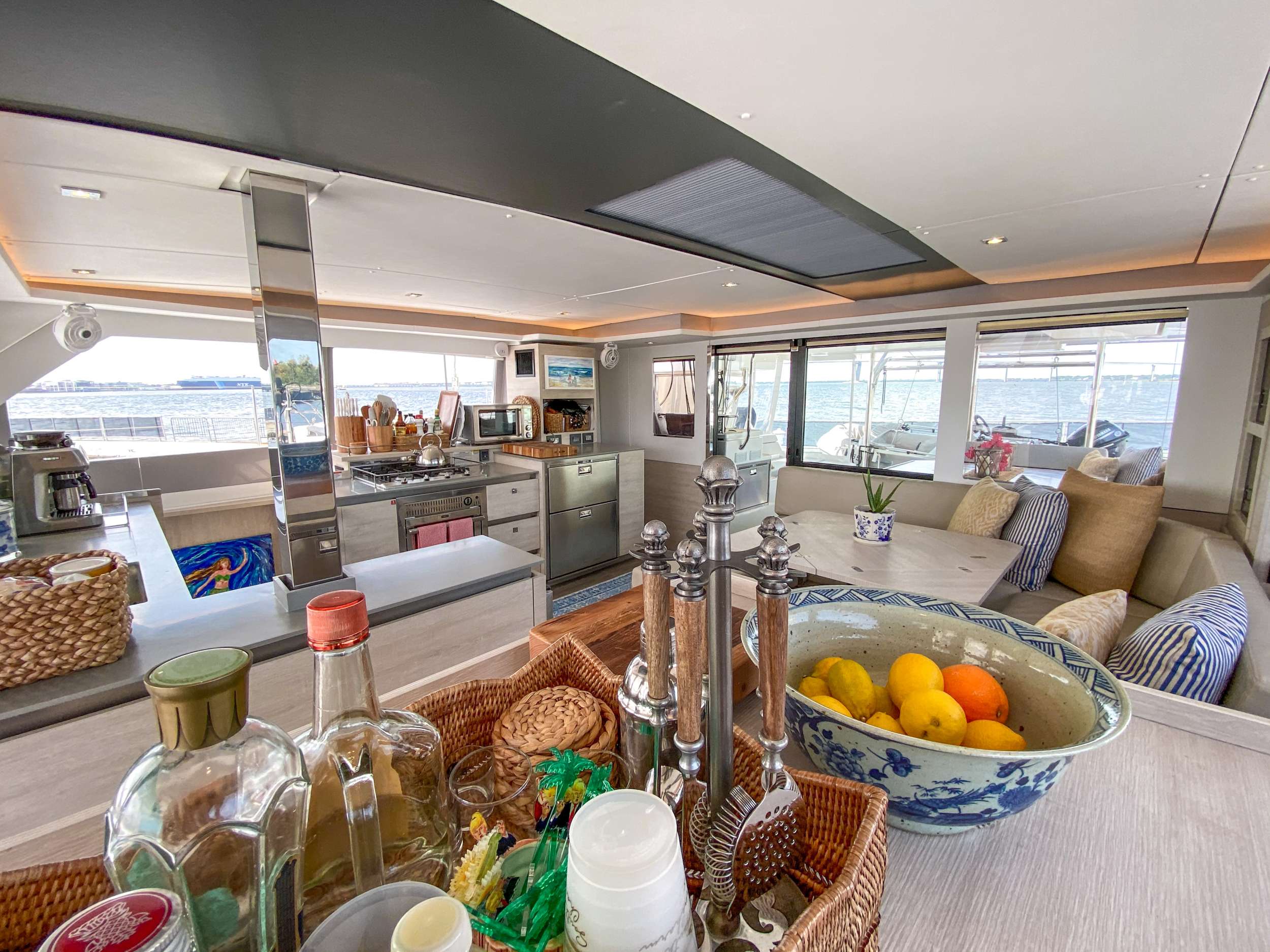 Click Here to Exit
If ever a couple was built for the close-quarters intimacy of full-time cruising, it’s Kevin and
Elizabeth King. These Leopard 50 owners have walked through life side-by-side since infancy.
“Elizabeth and I met in church in Fort Smith, Arkansas, when we were about two-years-old,”
says Kevin. “Our families were close. We went to church together, and our fathers eventually
became business partners. Elizabeth and I even have the same birthday - day, month and
year.”
After attending the University of Arkansas and working for their families’ telecom company, the
energetic, ambitious couple decided to go into business for themselves. They did so in their
usual way, together and full throttle.
“In 2005, we decided to start our own real estate brokerage,” says Kevin. “It took off like mad.
With Elizabeth's marketing skills and my sales and recruiting experience, everything just
exploded. We became the number one volume real estate office in our region in just our third
year.”
Of course, that success came at a price. As much as they loved their work, Kevin and Elizabeth
knew they needed both a way to occasionally escape the demands of entrepreneurship and a
plan for their long-term future, i.e., retirement.
As it turns out, there was a one-word answer for both: Sailing.
“Elizabeth came up with an idea to go sailing,” says Kevin. She found a crewed charter in the
BVI, and we went and absolutely loved it.”
Loved it a lot.
Kevin, who never goes along for the ride, spent much of that first cruise learning the basics of
sailing from the crew. Over the next three years, the Kings immersed themselves in their new
passion. They took ASA courses and went on more cruises. Kevin even volunteered to crew on
passages up and down the East Coast.
The couple was pleasantly surprised by the welcome and support they received from their
fellow cruisers.
“The sailing community is made up of a lot of good, caring people,” says Kevin. “They're
like-minded. They enjoy sailing, obviously, but they also enjoy the sense of community and
helping others. It’s amazing how quickly you can make friends even during a pandemic.”
In 2019, the Kings put their seamanship to a life-changing test. They successfully crossed the
Atlantic via the Azores with their three kids on a friend’s Leopard 45. The trip sealed their
decision to go full-time and validated their 2018 decision to purchase a Leopard 50.
Kevin and Elizabeth took delivery of their 50 earlier this year and say it checks every box on
their design and performance list.
“We liked the Leopard a lot because of the forward hatch and the forward seating area,” says
Kevin. “We love the flybridge, too. The heavy displacement is important to us. The boat is solid,
like a tank. We've been in some pretty high winds being offshore, and it handles great. We've
never felt unsafe with the Leopard. Taking the option of the larger engine was a good call. We
use that added power a lot coming in and out of some inlets in Florida.”
The Kings’ Leopard, Southern Charm, is now pretty much home for Kevin, Elizabeth and their
daughter, who is finishing up high school remotely from the Leopard’s lounge area. While the
couple must occasionally spend time in Fort Smith as they wrap up the sale of their business,
they hurry back to Southern Charm as soon as possible.
The COVID pandemic has had a mixed impact on the King’s new-boat experience. On the
downside, the couple was forced to cancel a planned maiden cruise to the Bahamas, a cruise
to Acadia National Park in Maine, and visits by friends and family. But the corona-caused
acceptance of remote meeting options reduced the need for those trips back to Arkansas.
Once the all-clear sounds, the Kings would like to explore the Bahamas and circumnavigate
the world. Closer in, they look forward to introducing their friends and family to Southern
Charm and the world of sailing.
“Fort Smith is a border town with the Arkansas River wrapping around half of it, “ says Kevin.
“We have lakes all around the city, so lots of our friends grew up skiing and wakeboarding and
all that kind of stuff, but nobody's really been on a big sailboat.”
The couple also plans to offer crewed cruises on Southern Charm. Kevin says they might do
ten or fifteen cruises a year, “just enough to cover some of our cruising costs.” And scratch
their entrepreneurial itch, no doubt.
When exactly all this might happen is still up in the air, given the continued health concerns.
And that’s fine with the Kings.
“We've kind of quit planning with COVID,” says Elizabeth. “We have a general idea of what
we're going to do, and then we're just pretty loosey-goosey from there.”
Adds Kevin: “We were on a treadmill with work for a long time. We want to spend some quality
time enjoying the slow route. Not hurrying on an agenda to get anywhere, but enjoying the
places we visit and taking the time to meet locals and enjoy the local food, and get to know
people a little bit instead of hurrying to get the next spot.”
One thing is certain, even in these crazy times. Whatever the future holds for Kevin and
Elizabeth, they’ll experience it hand-in-hand. 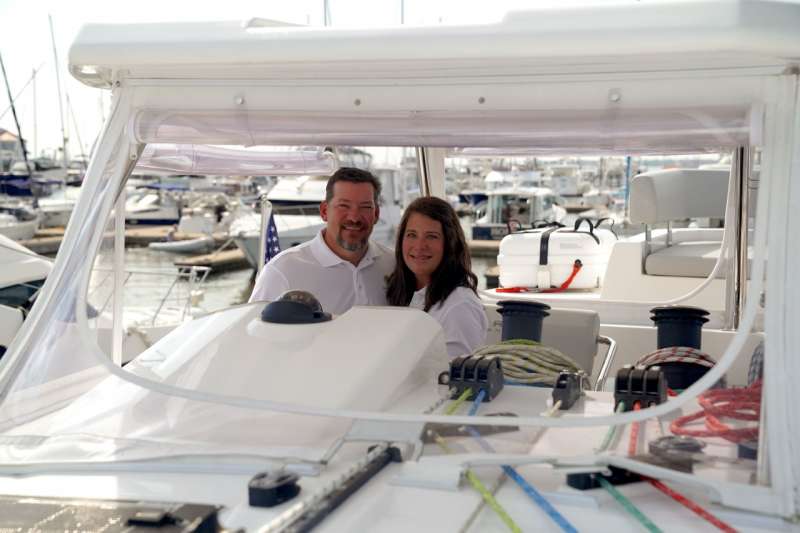 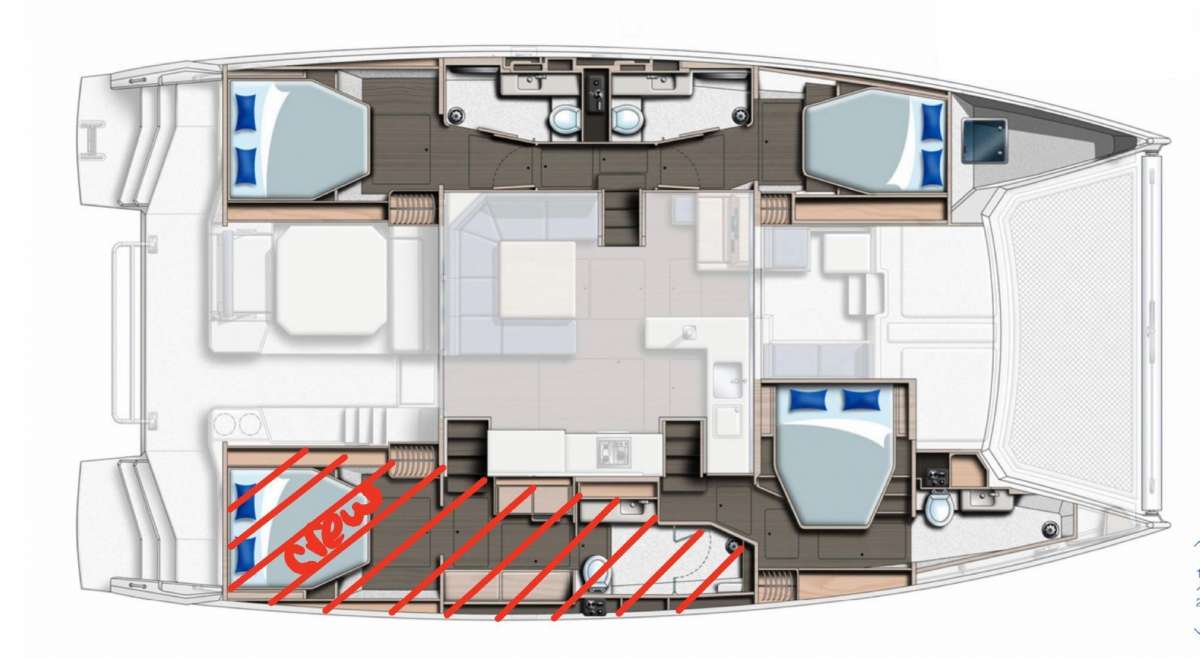