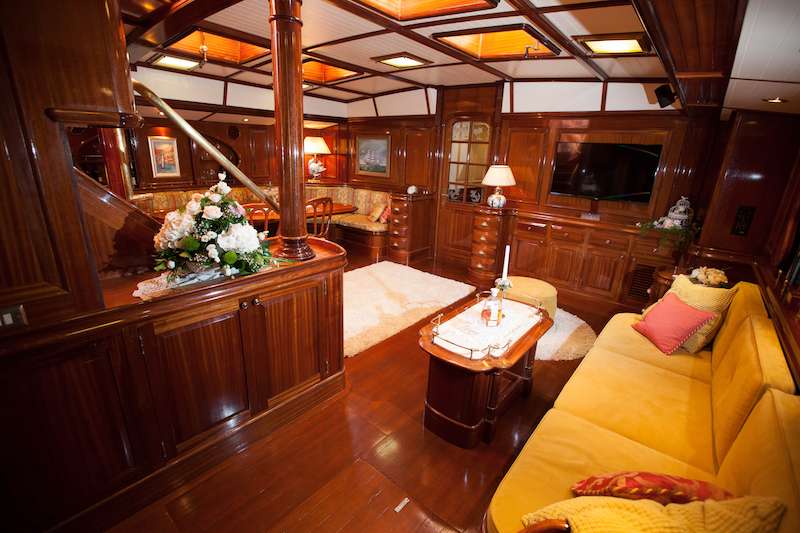 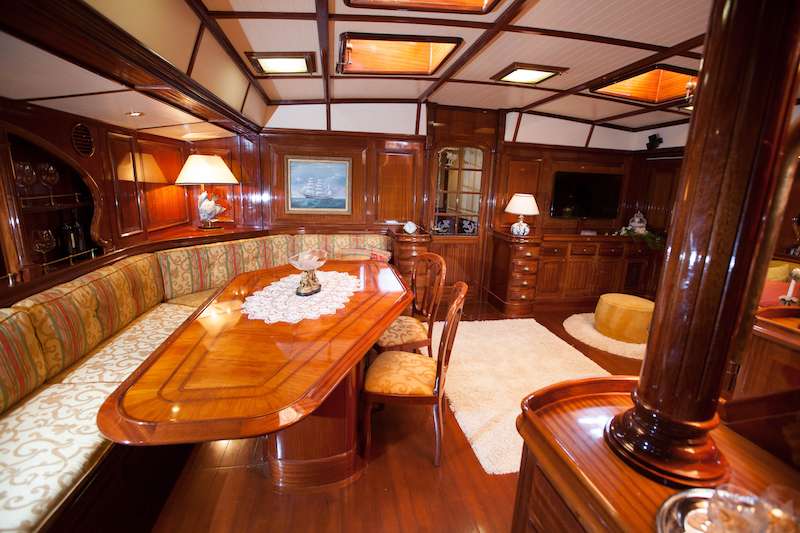 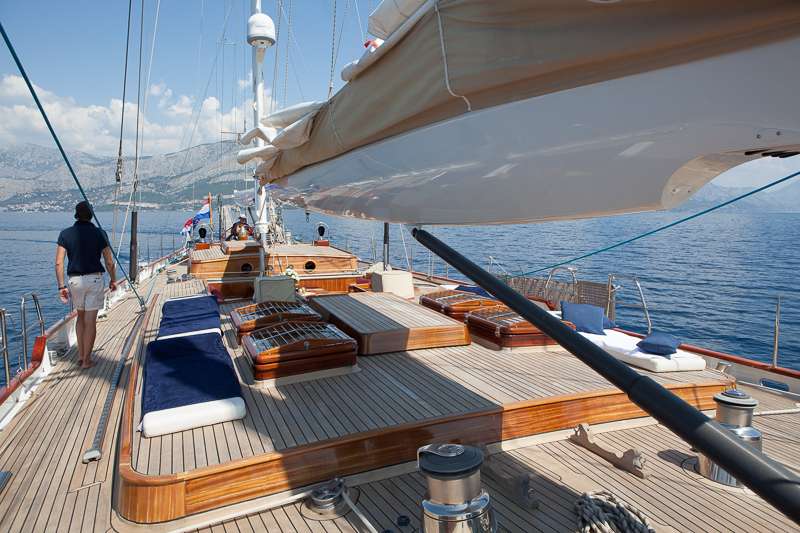 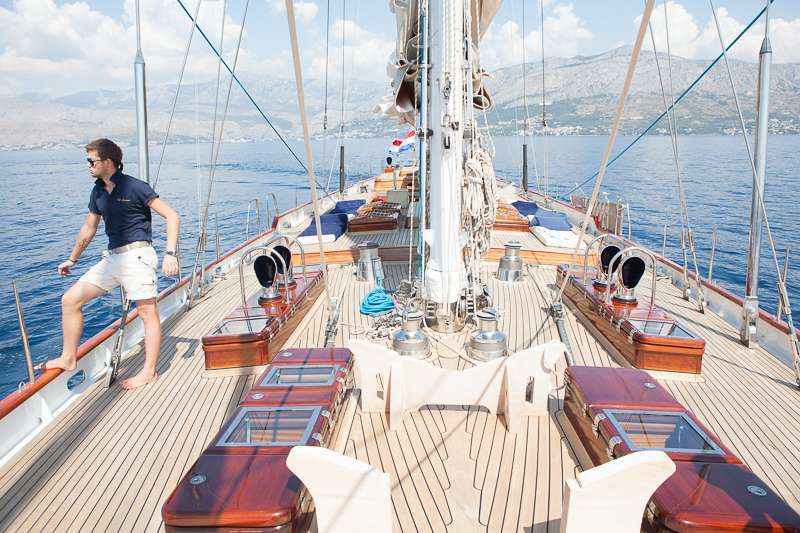 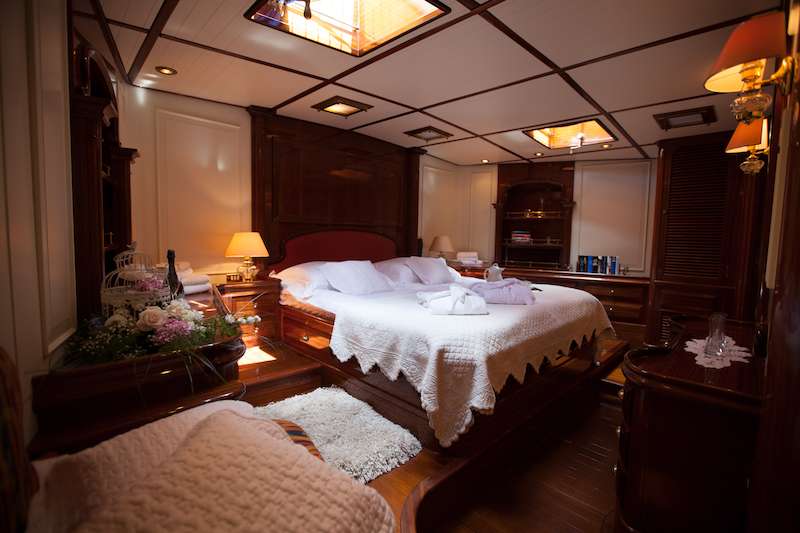 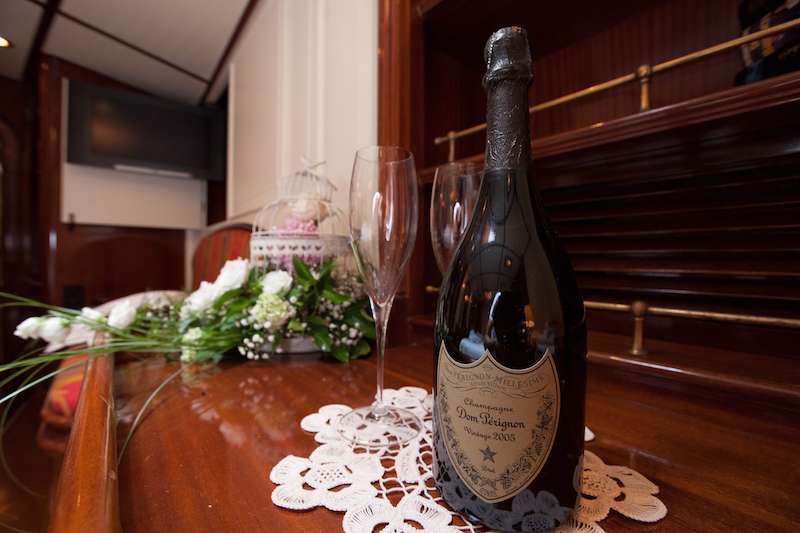 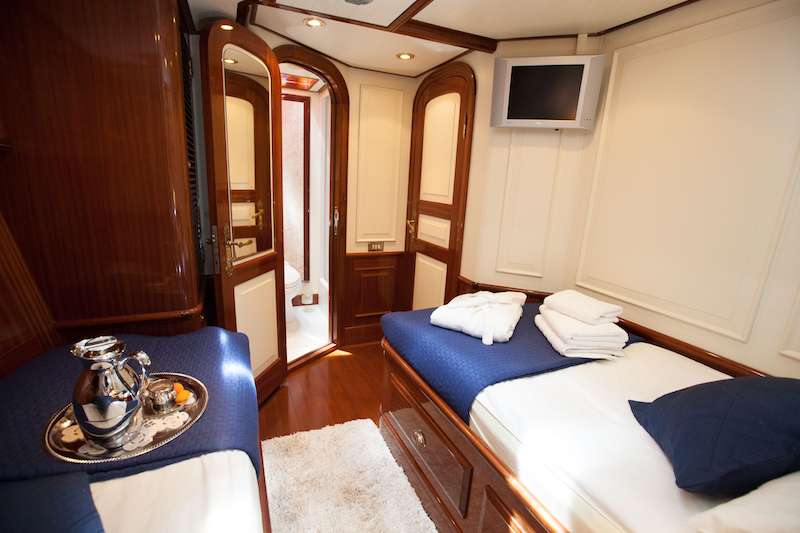 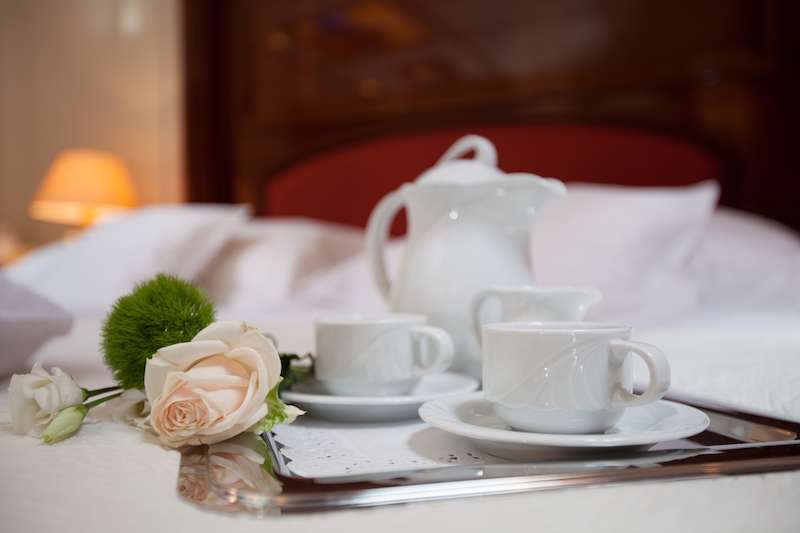 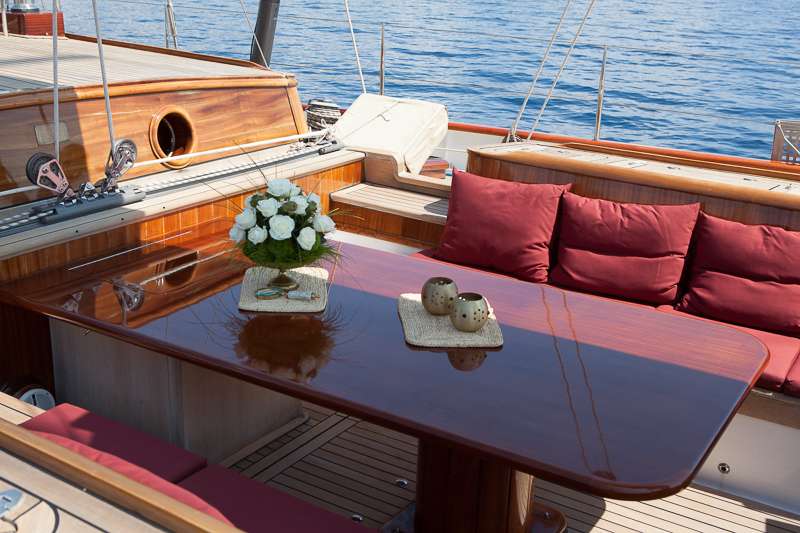 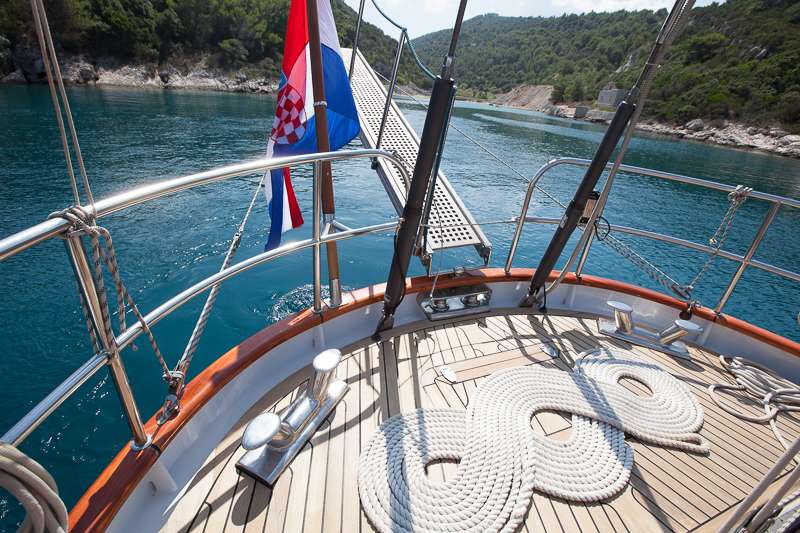 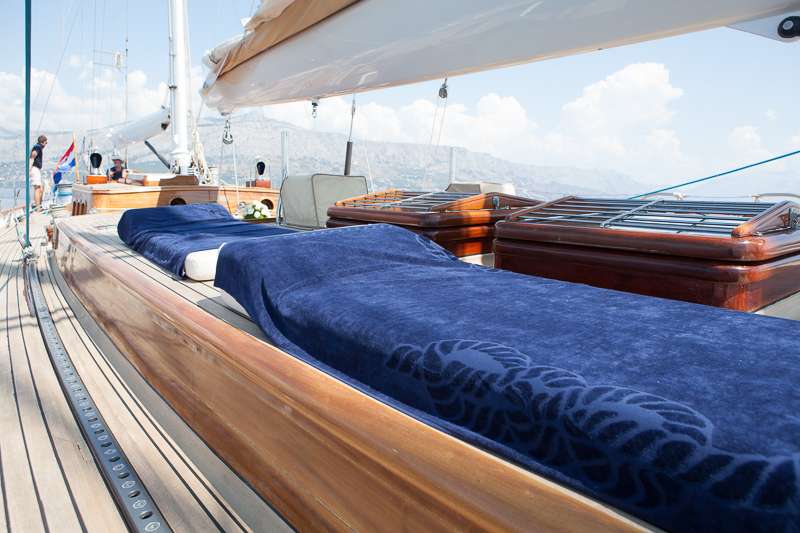 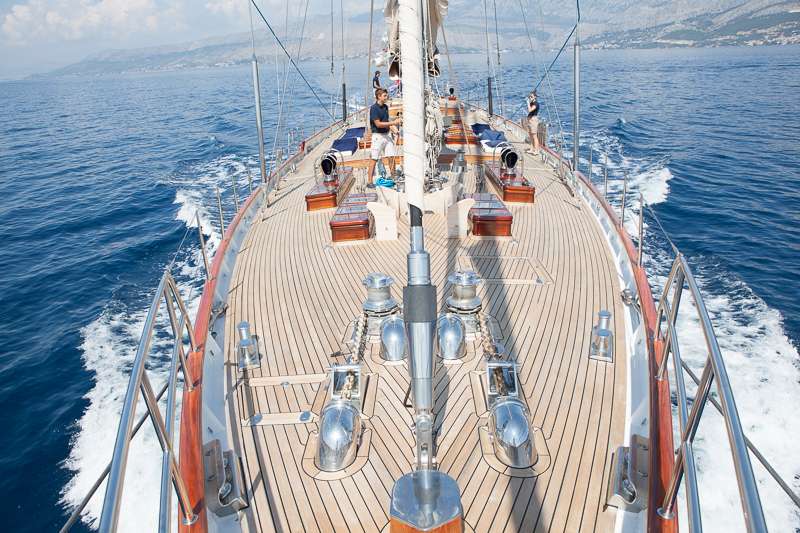 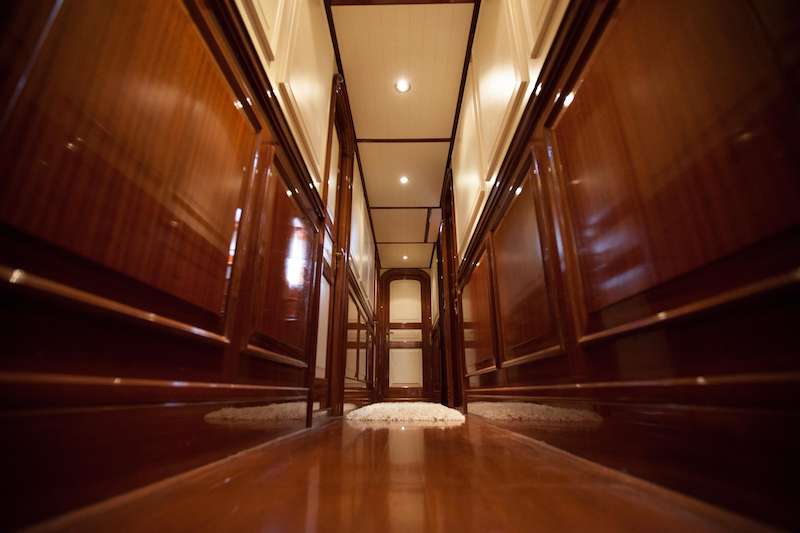 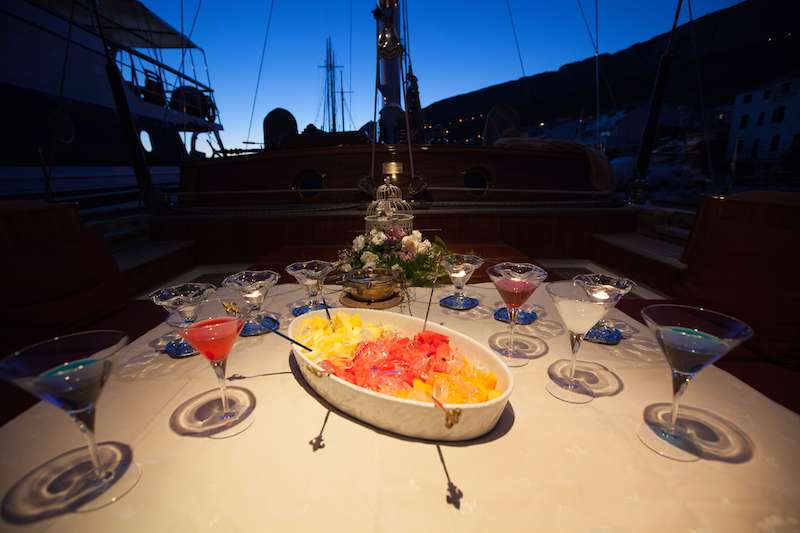 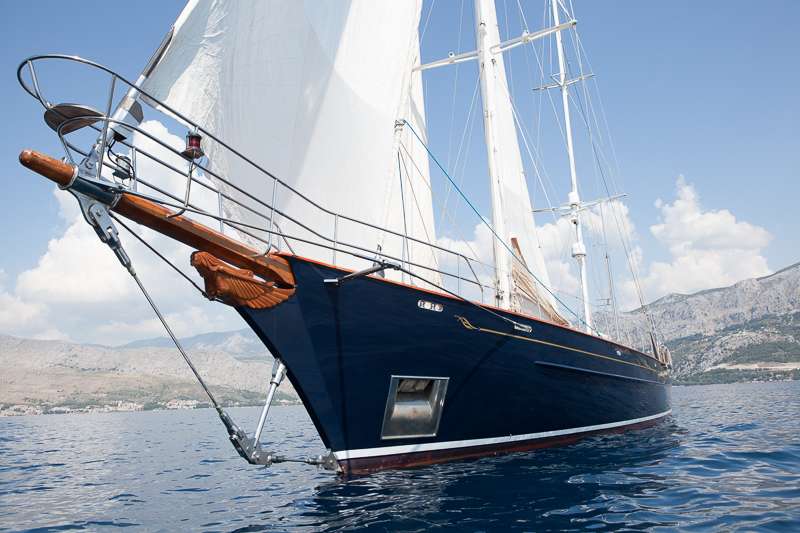 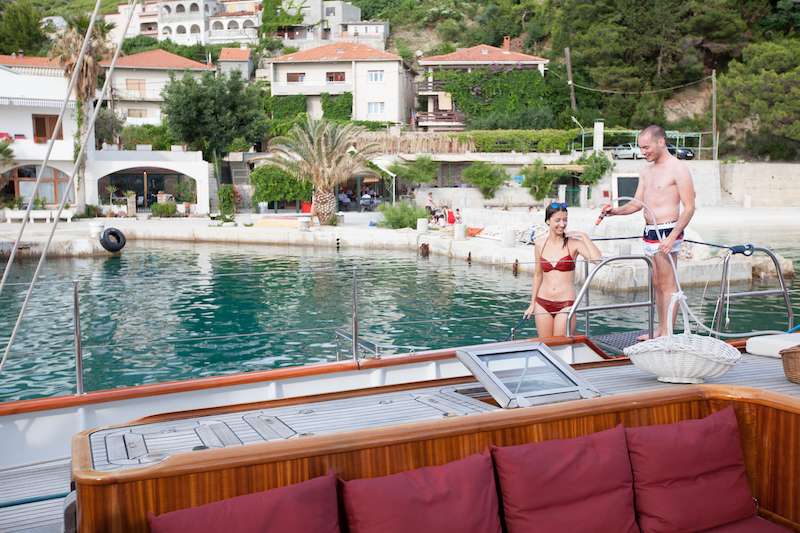 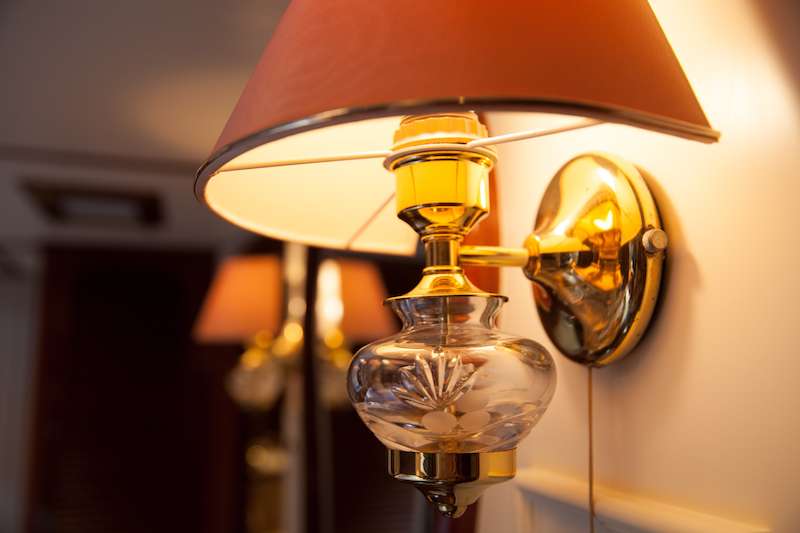 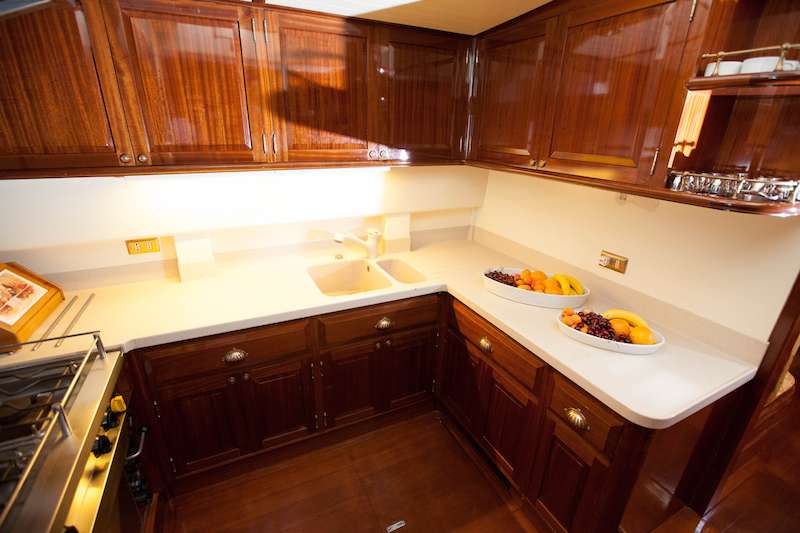 Click Here to Exit
CAPTAIN: Duje was born on 18th January 1968 in Split. After having graduated from Maritime High School as a sailor, and having completed the deck cadet apprenticeship on the ocean-going vessels of the Šibenska plovidba Shipping Company, Duje took over the steering wheel of a motorsailer, the former trabakul “Lav“ (a type of Adriatic Sea sailing coaster), owned by the same Ownership of Lauran.
It is important to note that even as a young deck cadet, during the time of his apprenticeship, he proved himself to be a very brave and bold sailor with the qualities worthy of the highest rank of captain, with his virtues of human understanding, expertise, as well as a down-to-earth attitude when it comes to risky situations. Through stormy weather, in a sailboat shipwreck, Duje heroically saved one entire family from certain death.
With a family maritime tradition and the genes of skilful sailors flowing through his veins, since early childhood Duje has experienced nearly all the ways of the sea and winds. Alongside his father and grandfather, he has sailed throughout the entire Adriatic Sea, reaching Italian and Montenegrin ports.
In the 90s, Duje became the captain of his own fishing boats which were used for commercial activities for nearly 10 years. It is well known that fishermen are the sailors with most experience and knowledge, therefore at that time Duje also specialized that field and developed himself into one of the best fishermen, both in fishing catches and nautical miles.
Having inherited an old trabakul called “Lav“, which he used to command before the 90s, Duje decided to build, with his own hands and with the help of his family, a true copy of a Croatian sailboat from the 16th century, a karaka. He succeeds in doing so. After the launching of the newly built “Lav“, the pride of Croatian history, Duje took over the steering wheel and command of the ship for over 20 years creating a brand in maritime tourism. He took care of the total refit of LAURAN, and his the Captain since her renewal in 2014.
CHEF:
Ivica Bućan was born on 21st January 1969 in Split. After having graduated from high school in Split in center for education in culture and art, as associate in INDOK and as professional archivist, he continued his further education in Split and finished professional education to perform retail sale in “Ante Jonić” school. His value and ambitiousness are visible in the next step, where he finished extra education for computer work as user of basic level. His mayor characteristics are communication, organizational and initiative skills and above all that hardworking. Because of his experience, he is characterized as a good worker who fits in a new working environment very fast, always ready for cooperation and team work plus he is willing to learn new things with the aim of business and personal improvements.
He have rich working experience in different places and on different positions. He worked for two years in Cote d’Azur on the motor yacht called Victoria M and was chief and director of purchase and organization. After that he came back to Croatia and worked in many different places which are night club Carpe Diem (island Hvar, 5 years), where he was bartender, waiter and decorator, after that Hemingway bar (Split, 1 year) as bartender, after that bar Veneranda (island Hvar, 3 years) as bar director and VIP bartender. Another job was in pub Oliver Twist (Zagreb, 1 year) as bartender.
After Croatia he moved to Ireland where he was bartender supervisor in bars and clubs called Black Bull, Samsara cocktail bar and night club Pink. Again, after Ireland, he went back to Croatia, precisely in Solin, where he worked in restaurant Gašpić as waiter, catering organizer and catering organizer for film industry and he also was director of sales and fish distribution for retail and wholesale.
Ivica also worked on island Hvar and in the prestigious Sheraton hotel in Zagreb. Ivica speaks fluent English
DECKHAND: Jozo Nazor is the youngest crew member, but is as important as the rest. He is enrolled in a private culinary school and his wish is to acquire the knowledge he needs to become a top gourmet. He loves shipping and sea, therefore, when he is not at school, and the whole summer seasons, he spends all his time on LAURAN. He has also attended a music school; he performs as a drummer and composes music as well.
On Lauran, Jozo is everywhere: you will notice and see him from bow to stern……but he is very motivated to help in anyway the rest of the crew, cuisine, housekeeping works, etc
STEWARDESS: LUCE. With her personality and spontaneity, this young girl will fascinate you from your very first encounter.
Petite, but with an extremely strong character, Luce has surprised many by proving to be either an excellent sailor or a precise hostess. The sea and the wind are a challenge to her. Serving guests and making their days more enjoyable with small details means a lot to Luce. She is the ideal choice for a hostess on this beautiful sailboat. After having graduated as a ship superintendent, Luce has chosen to continue her education for a Master’s degree.
As for her free time, she selflessly spends it with her pet dogs. She is also a great expert in fashion, a humanitarian and philanthropist. By travelling she gets to know new cultures and mindsets, she is open-minded when it comes to life goals.
She speaks a fluent English. Very patient, hardworker, very dedicated to children (welcome onboard!) 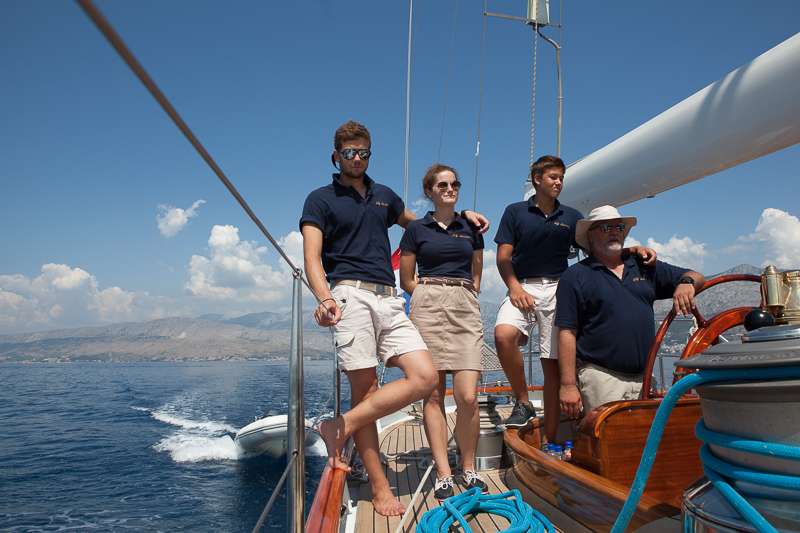