Click Here to Exit
Jirapat Lekngu (Ronny) :: Captain / Thai
Spoken languages: Thai and English. Captain Ronny was born in beautiful Phang Nga Province, well-known for its majestic cliff formations. Captain Ronny received his qualification from the Thai Merchant Marine Training Center. He has been working in the yachting industry for about 20 years, first as Captain on a live-aboard dive boat in the Similan Islands. He then moved on to become Captain of a Princess, followed by a Sunseeker, before commencing his position on AVELINE in 2013. Captain Ronny is happy to show his beautiful country, including the less touristic spots, and share his local knowledge of the best anchorages and places to go to on land. Friendly and personable, Captain Ronny enjoys riding his 500CC motorbike in his free time and -whenever his wife allows him- will cook family dinners at home including his favourite 'Geng Som'.
—
Mongkol Patmanee (Ball) :: Chief Steward / Thai
Spoken languages: Thai and English. Born in Songkhla Province in southern Thailand, Ball never dreamed that one day he would be working on a luxury yacht. With a Bachelor Degree of the Faculty of Liberal Arts and a Hotel Major, Ball developed tremendous talents in hospitality and service, creative interior style and arranging the most beautiful flower decorations. The major-domo of private villas of the legendary Amanpuri Resorts for several years, he discovered yachting a few years ago, and developed sea legs from day one.
Ball has exceptional 'Aman service' skills and is well-organized. He likes to exercise in his free time and is in the know of the best places to party on Phuket.
—
Santi Tapiket (Boo) :: Chef / Thai
Spoken languages: Thai and basic English. Born in Phuket, Chef Boo has gained culinary experience in some of the best hotels and resorts of Phuket. He started as steward in the Thavorn Beach Resort and very quickly moved from serving, into the kitchen to learn the trade from the resident chef. Chef Boo proved to have a natural talent for cooking which, combined with his impeccable taste, brought him to work at various 5-star resort kitchens such as the Allamanda and eventually the famed Trisara and Aman Villas. The fresh catch of the day, bought from local fishermen encountered while cruising, is Chef Boo's most popular item on the menu, followed closely by multi-flavoured Thai soups, curries and salads, such as his outstanding "Som O" (Pomelo salad). Chef Boo is happy to invite guests into his galley and caters to any and all food request of guests. His western food favourites are Spanish tapas and pasta and his greatest pleasure is to experiment and devise new twists on Thai and European dishes. Chef Boo stays in shape by playing Thai Takraw (kick volleyball) with friends at the Bangtao School in his free time.
—
Prateep Binabdullah (Deen) :: 1st Mate - Engineer / Thai
Spoken languages: Thai and basic English. Deen was born in Phuket and has many years of experience in the yachting industry, amongst others on Riviera Yachts. Deen has been working on board AVELINE since 2015. He knows the engine room inside out and keeps systems running smoothly at all times.
Deen also keeps the yacht's tenders in perfect shape and is particularly skilled in driving the jetski.
He likes swimming and scuba diving and is a lucky fisherman who catches fish often.
When not working on AVELINE, Deen likes to take his his wife and four children to the beach to spend family time together.
—
Alee Krohlek (Lee) :: Deckhand (Rotational) / Thai
Spoken languages: Thai and English. Lee was born in Phuket and with his engaging Thai smile and positive attitude, he is a great addition to AVELINE's crew. He has years of experience on other luxury yachts such as a Sunseeker 64' and Moonen 115'. Since 2015 he works on board AVELINE and he is well-versed with the yacht's systems and machinery. Lee has been cruising around the region extensively and is familiar with the lesser-known little bays and inlets. As the designated tender driver, he accompanies and assists guests who like to go swimming and canoeing and is very safety-conscious. Previous experience as a life guard ensure safety of the guests is always foremost in his mind. Lee raises chicken in his free time and likes to go fishing.
—
Sorasak Kingsanan (Dee) :: Deckhand (Rotational) / Thai
Spoken languages: Thai and English. Dee was born in Phuket; he is the most junior crew member and the latest addition to the team. He worked for 4 years on a private yacht, a Princess 88', before joining AVELINE.
Dee is an accomplished scuba diver who likes fish and marine life, although he is just as happy trying to catch a fish for dinner.
Dee likes to work in the garden, taking good care of his plants and also raises goats and enjoys 'big bike' trips. — 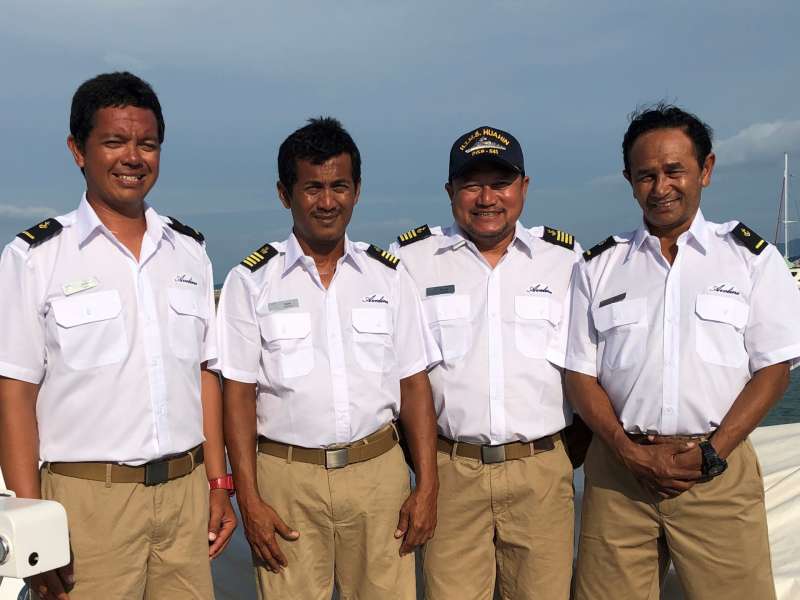 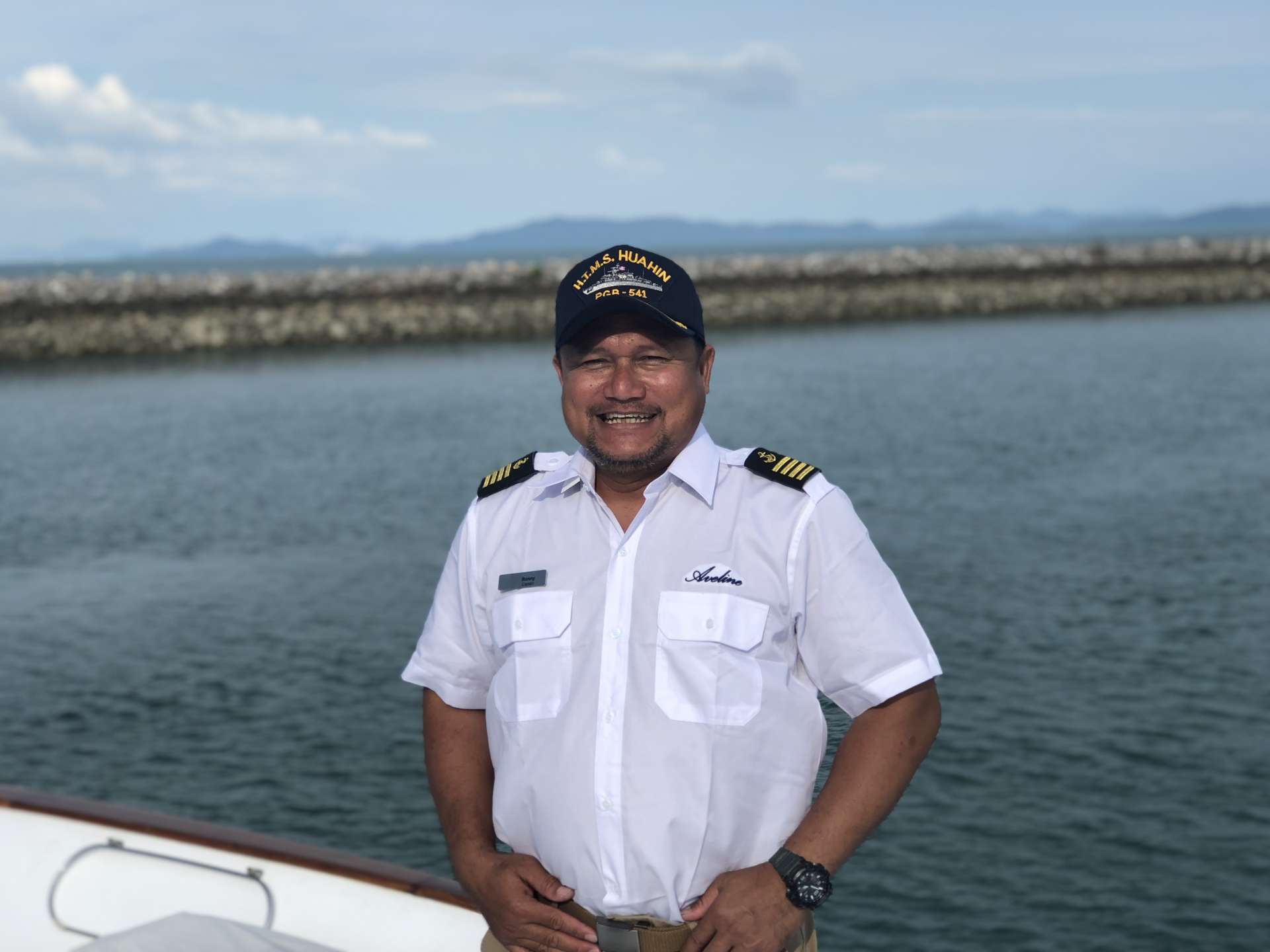 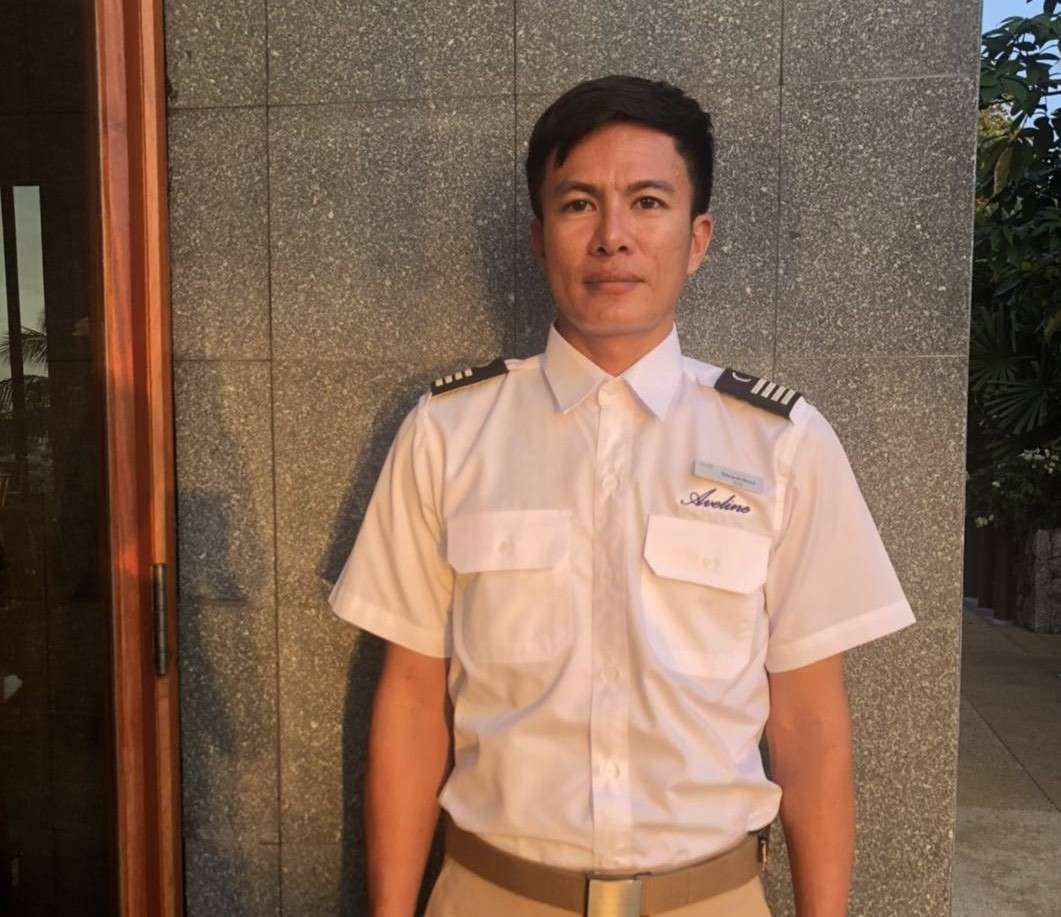 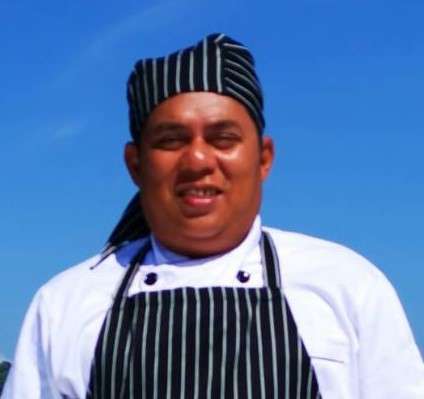 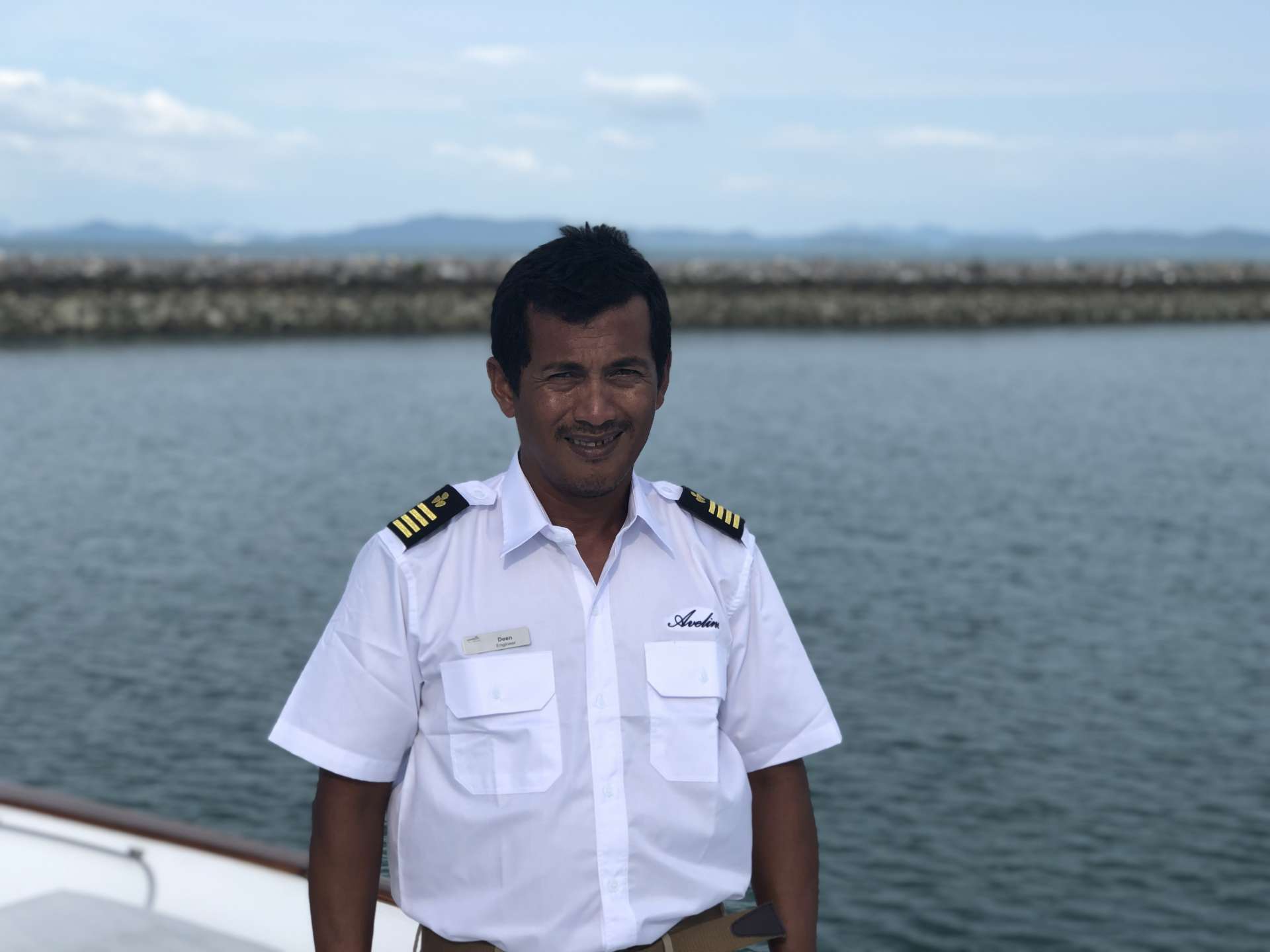 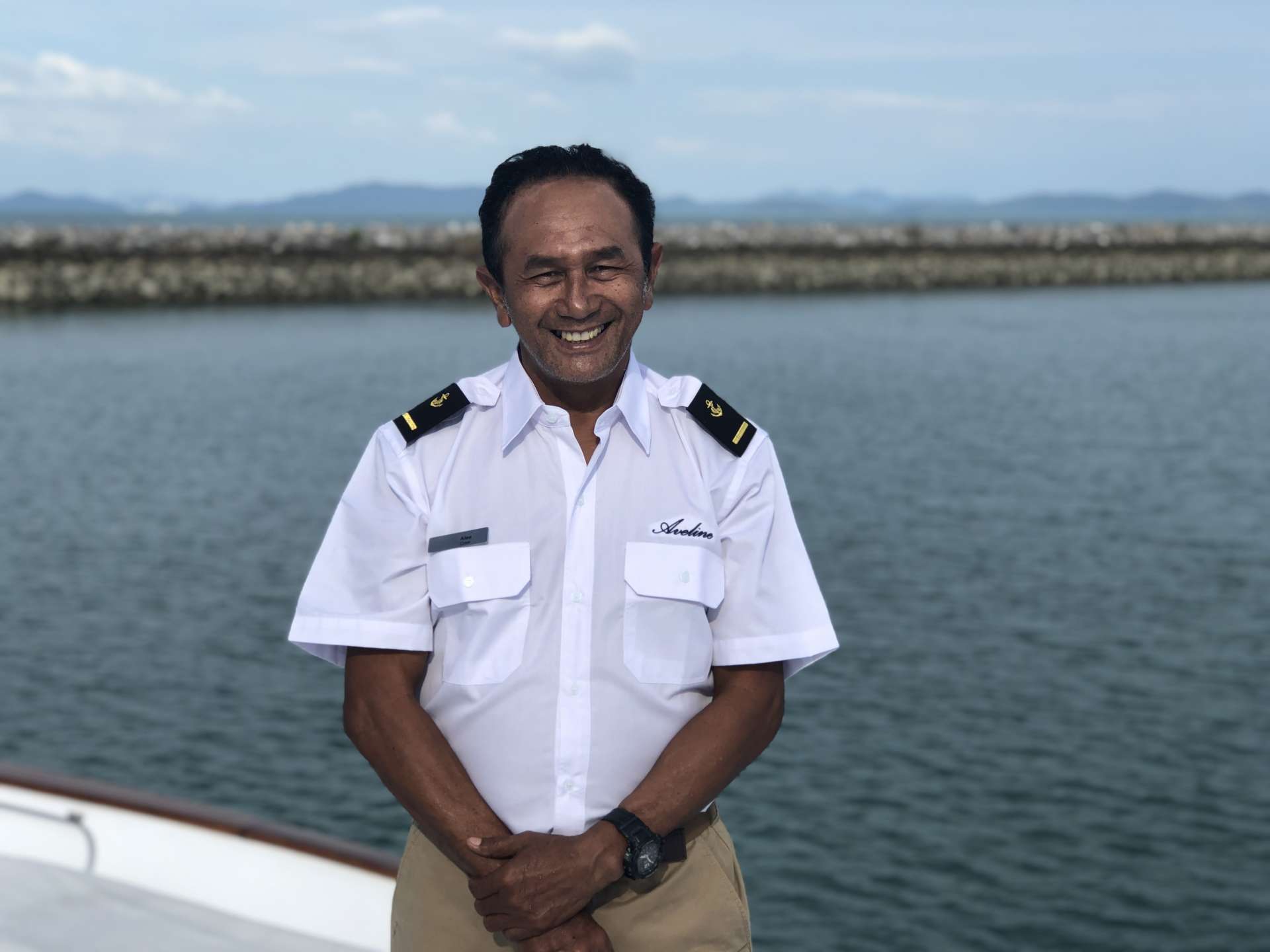 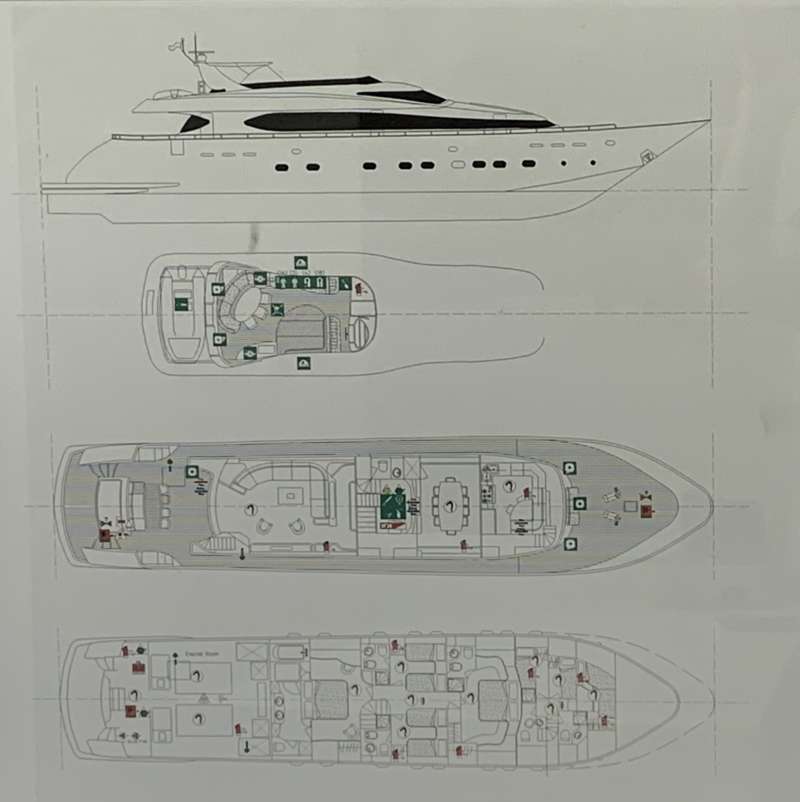