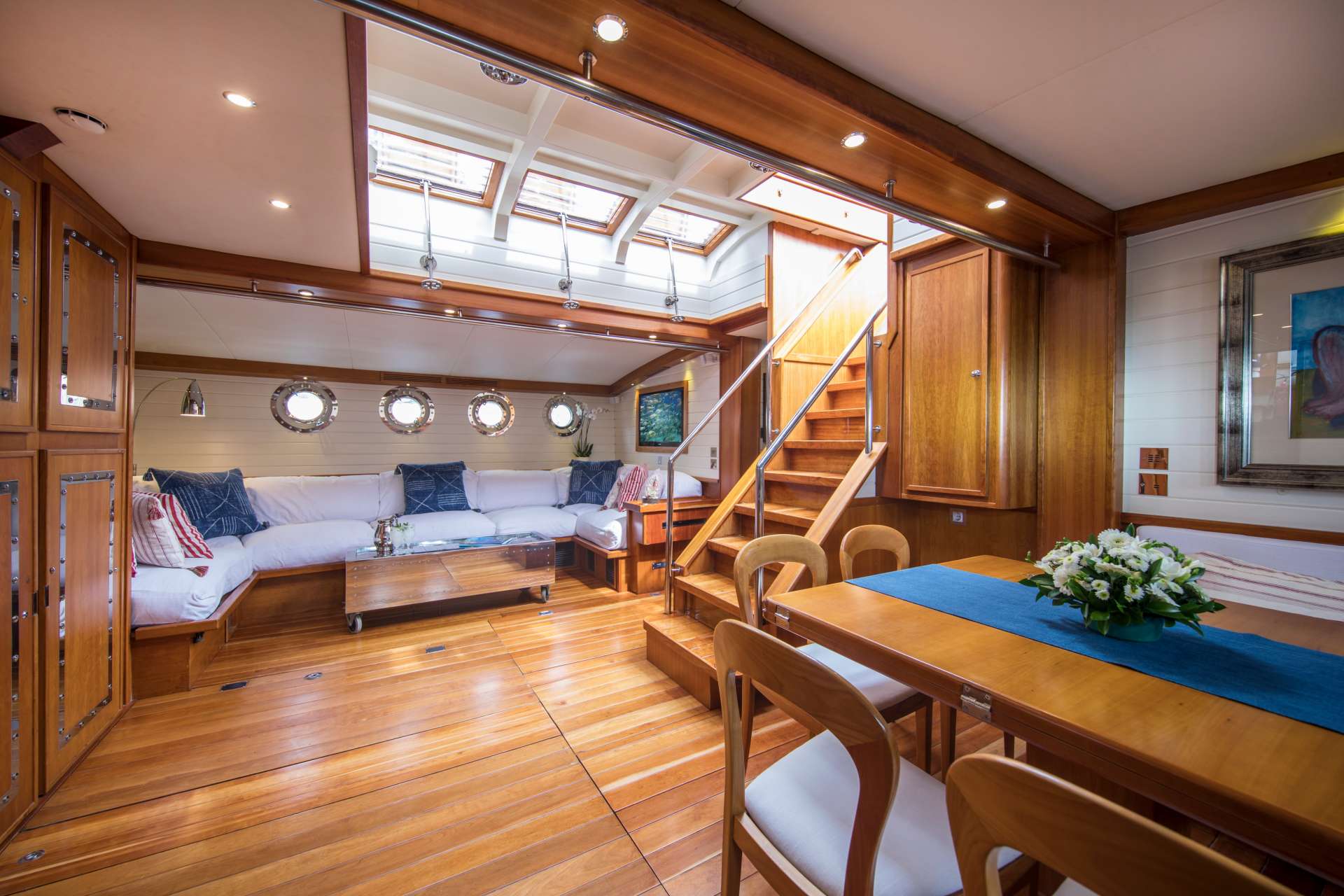 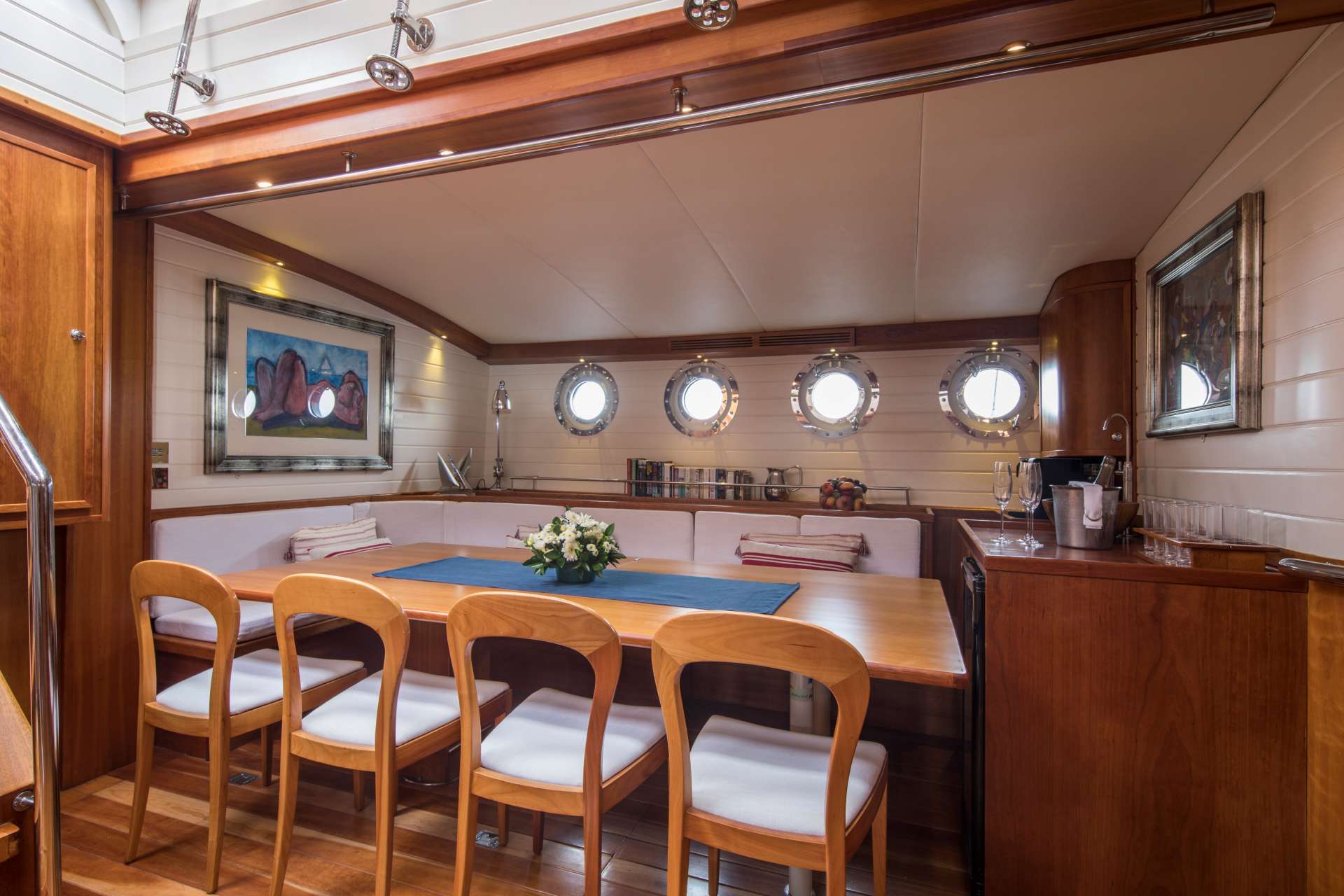 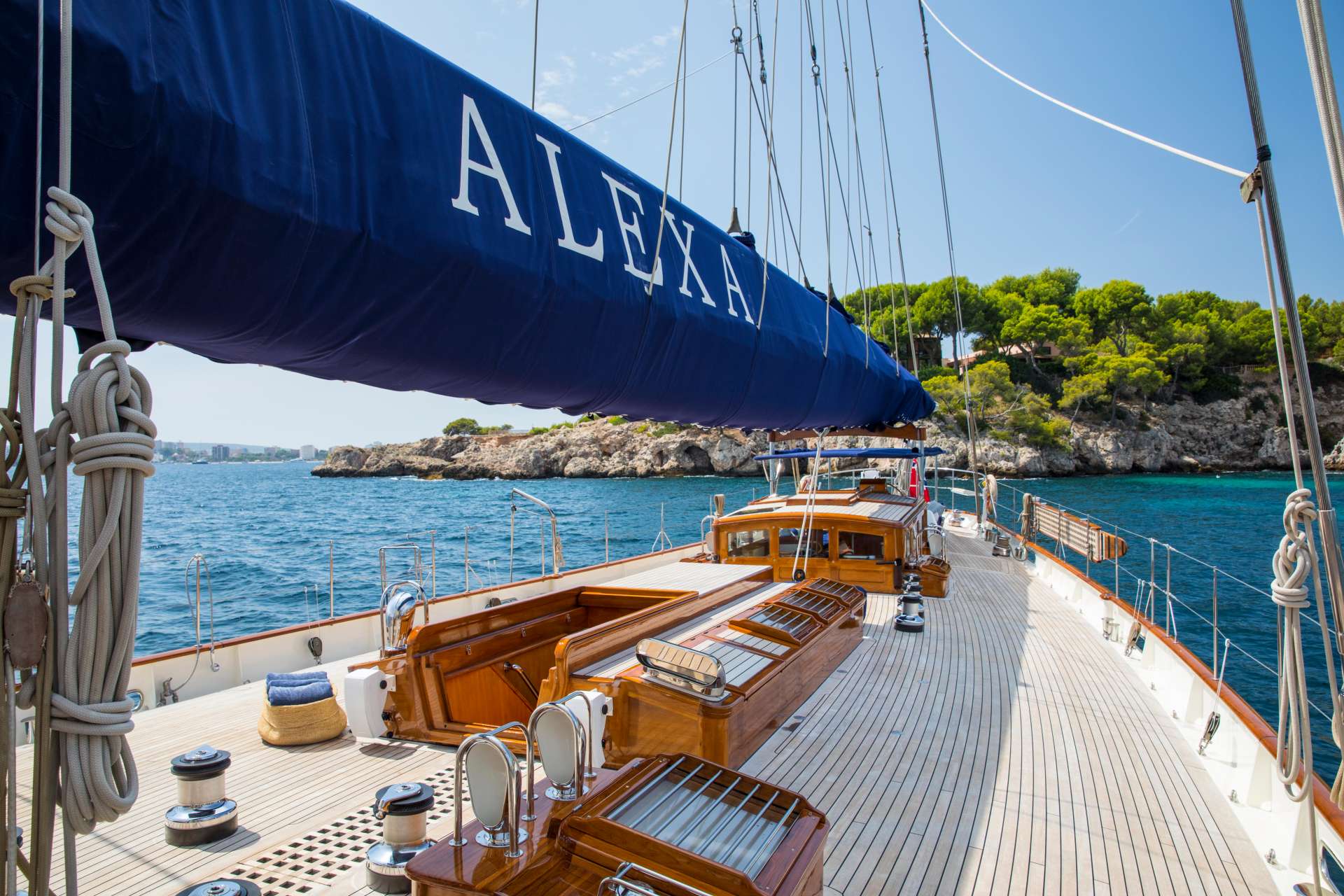 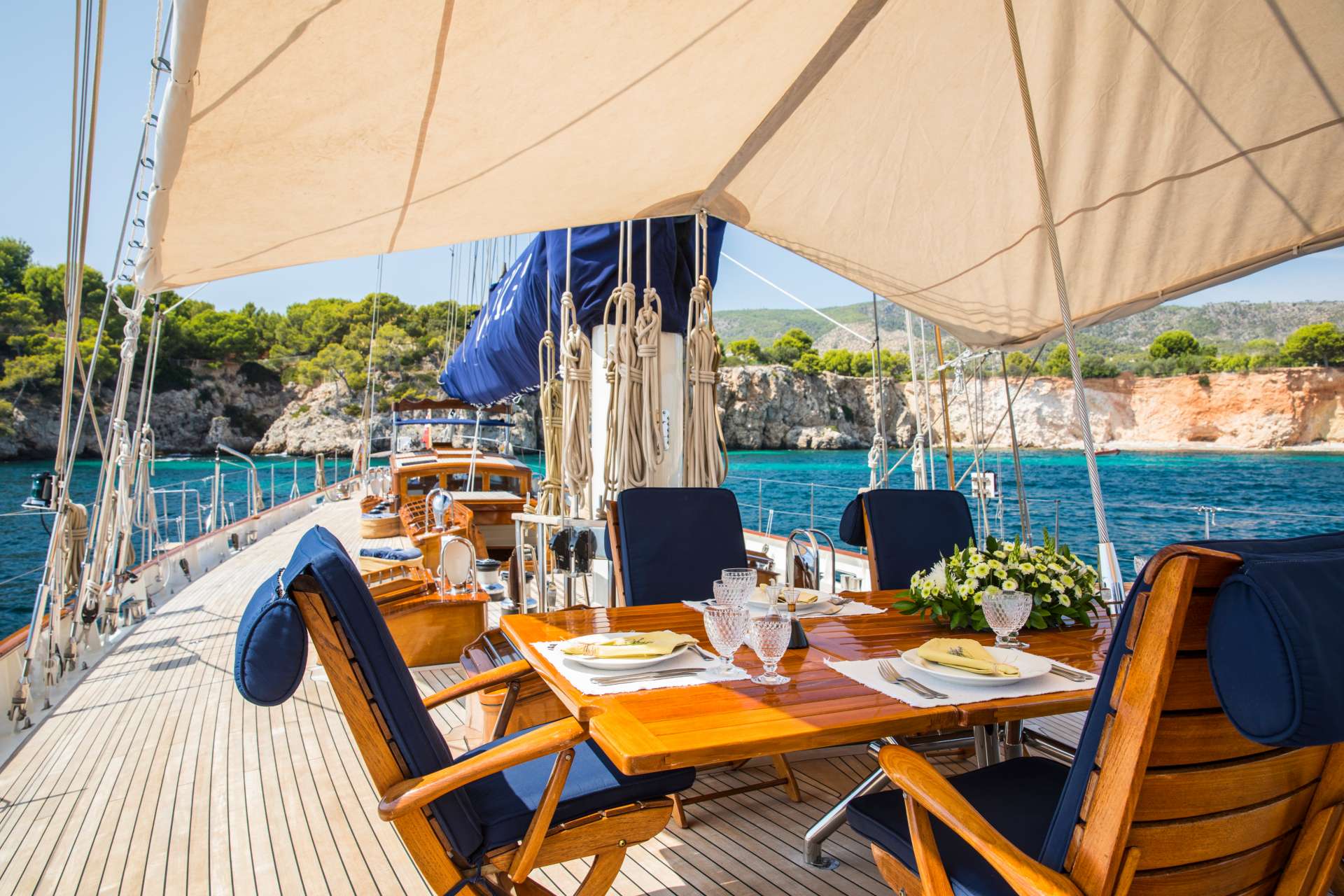 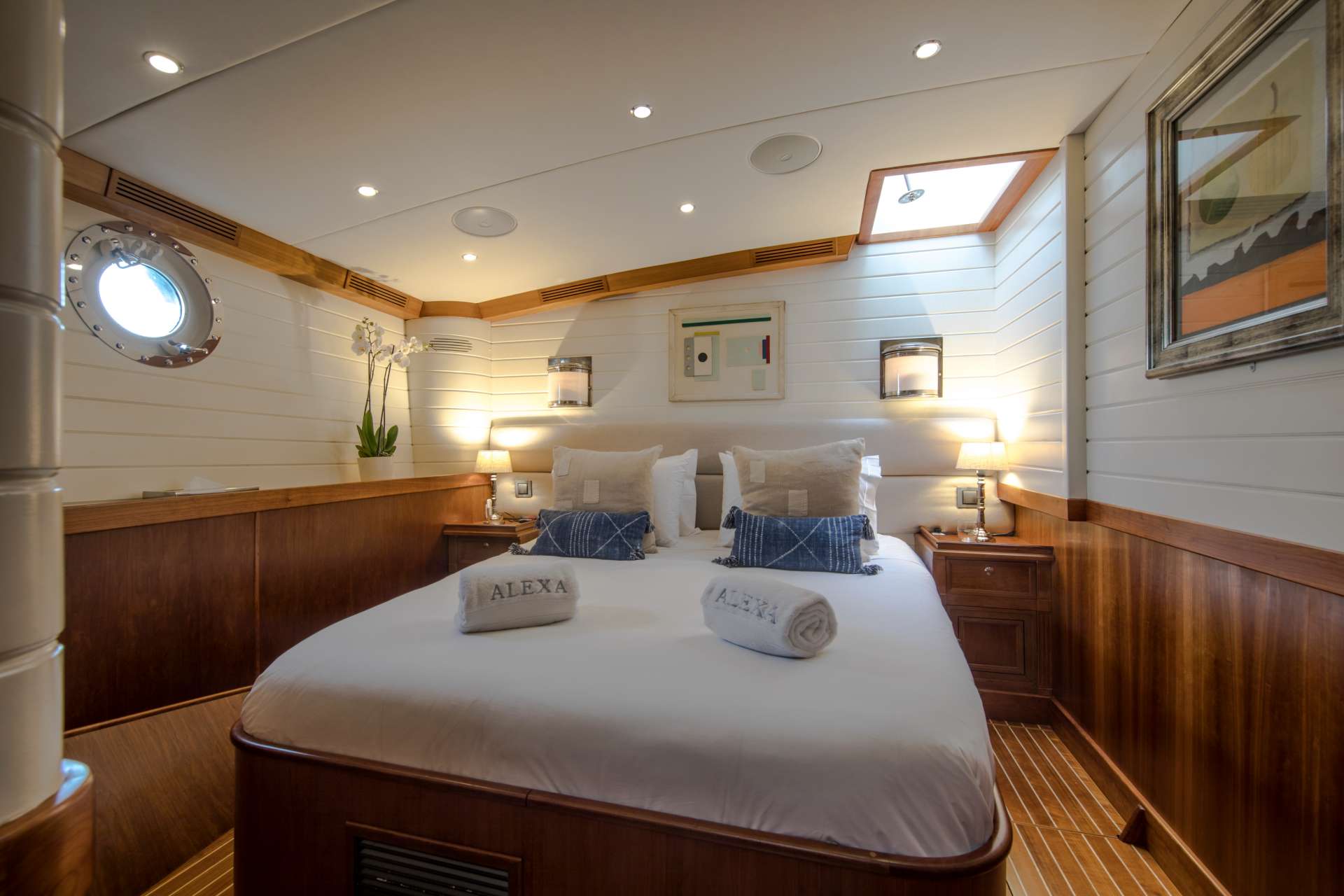 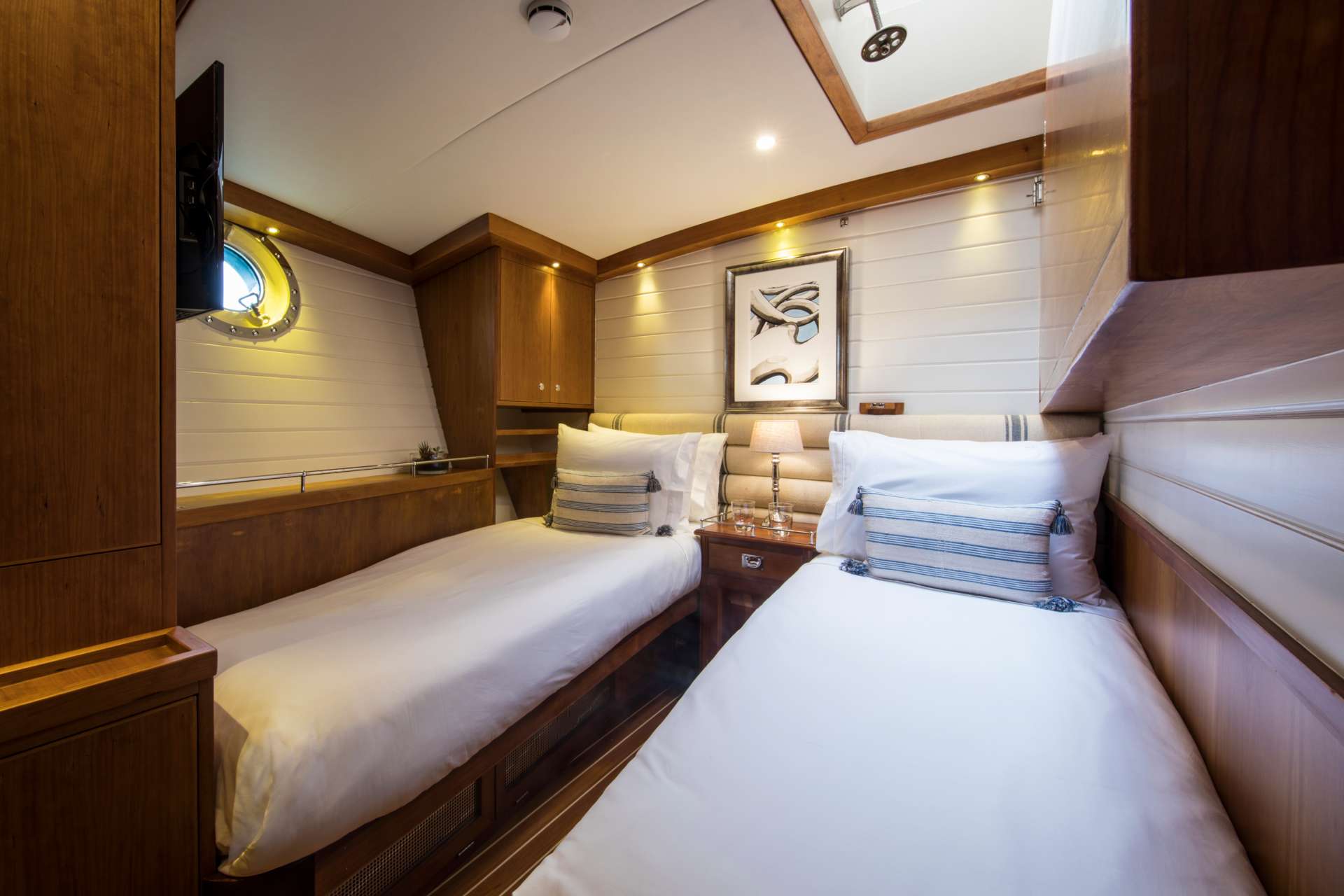 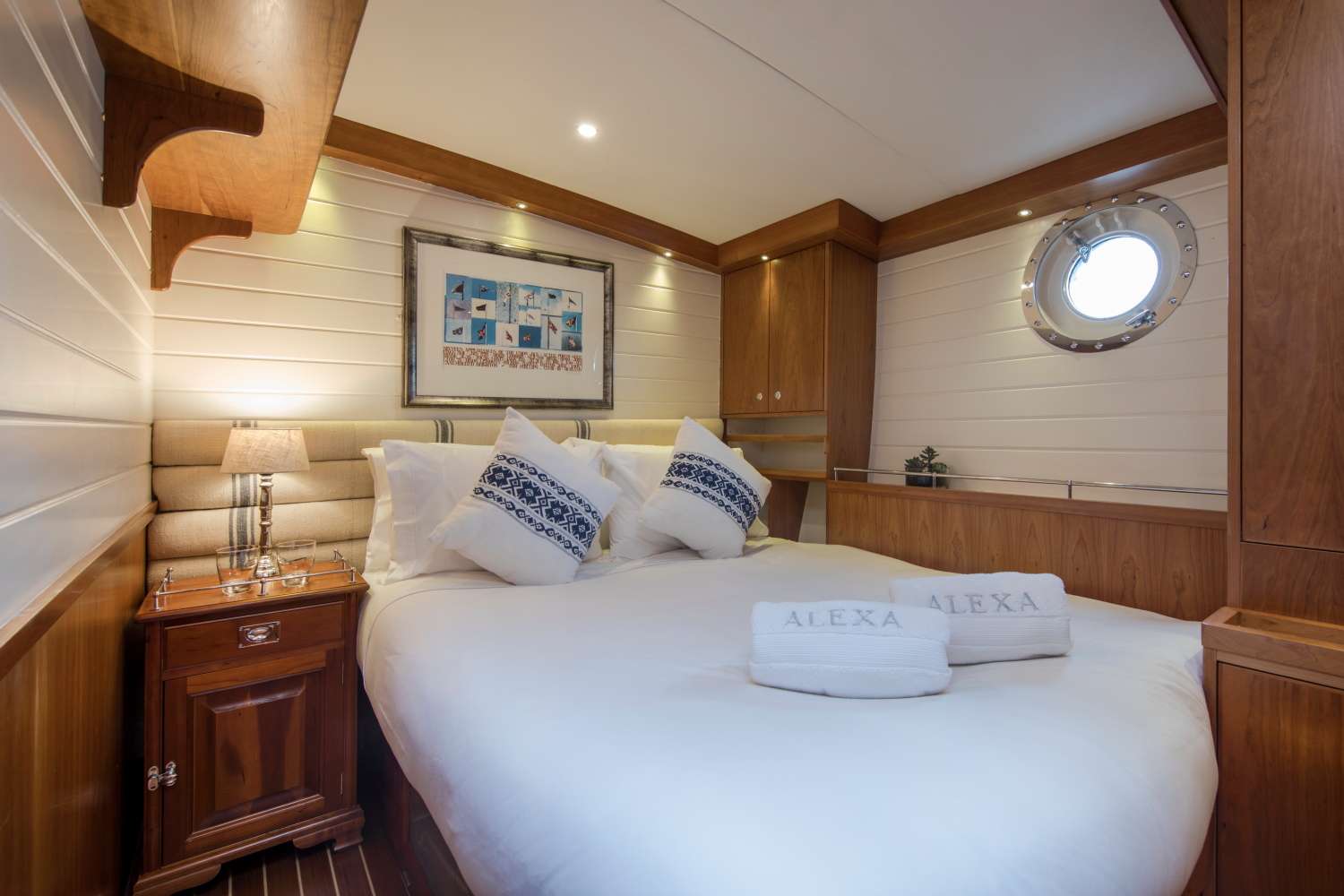 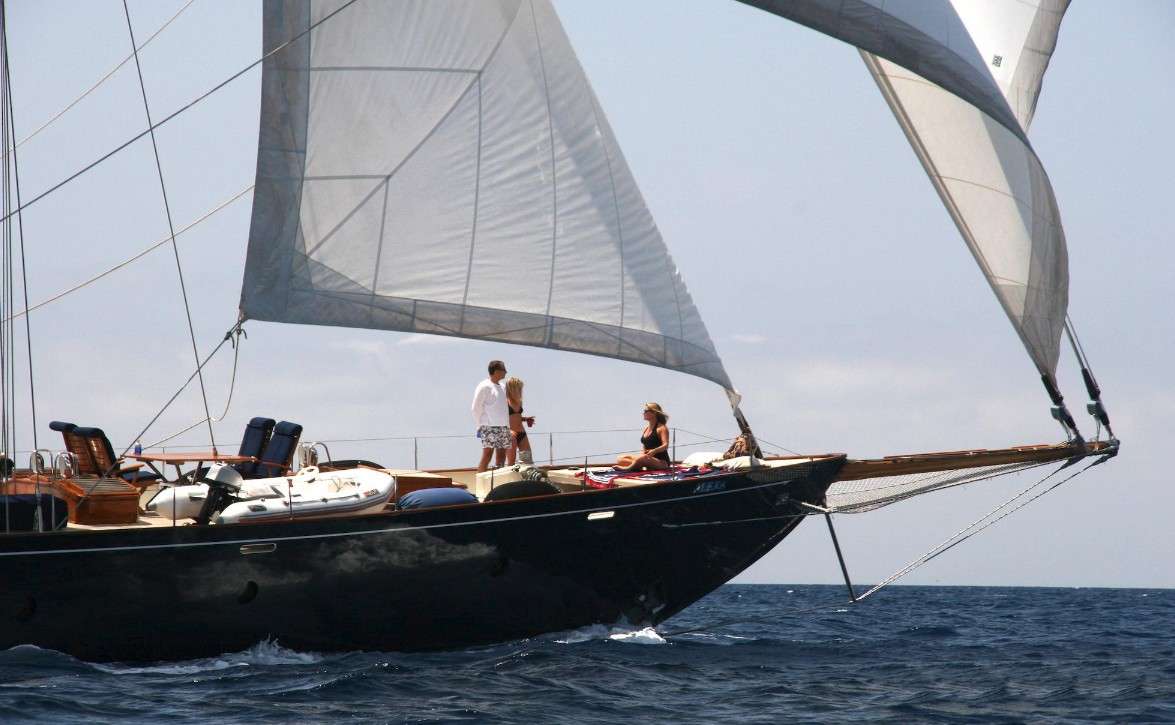 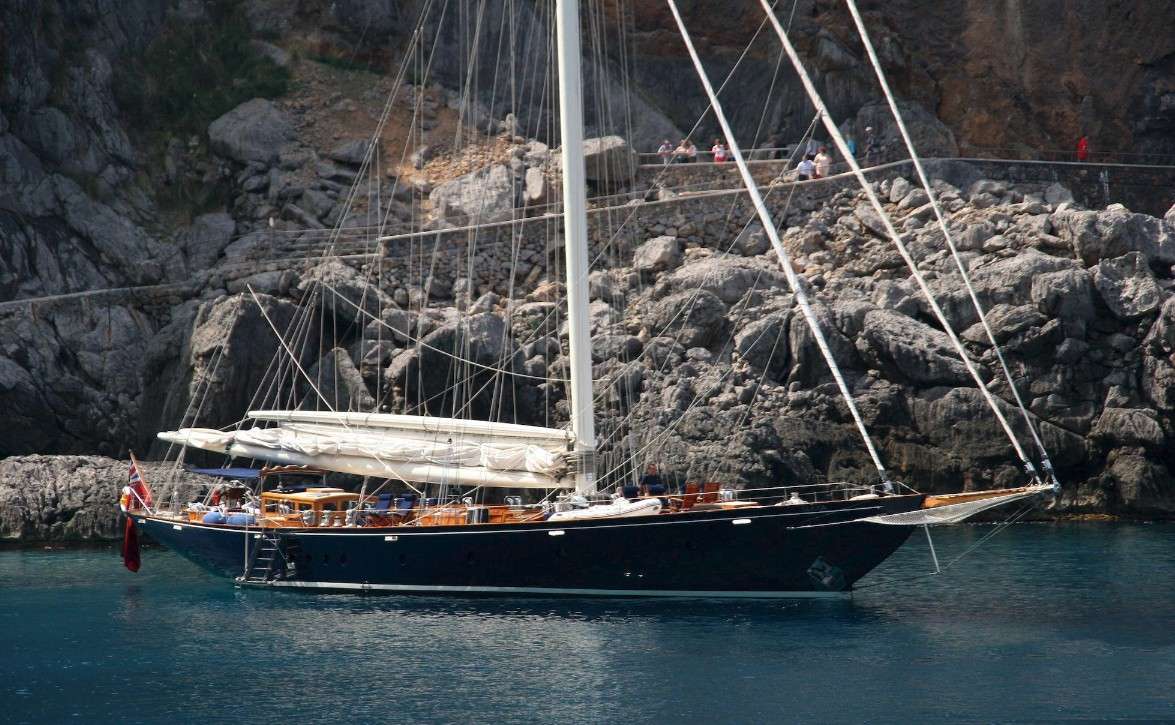 Click Here to Exit
CAPTAIN: Ross Murray - British
Joined Spring 2017
Ross is no stranger to yachting, with over 24 years’ experience in the industry. With a keen passion for the outdoors and sailing there is no wonder Ross made this his career. He’s has always enjoyed racing and been competing in various regattas in the Mediterranean, Caribbean and the Sydney Hobart Race.
Adding to the practical knowledge he has gained sailing tens of thousands of sea miles - including 17 transatlantic crossings, Ross holds a Master 3000ton MCA Certificate of Competence.
With his wealth of experience, Ross will ensure your stay onboard Alexa is both luxurious and memorable.
Ross is married and lives in Mallorca with his wife and two children. He enjoys living an active lifestyle and has an interest in skiing, squash, tennis, and rugby.
Previous yachts: S/Y Clan VIII, S/Y Polar Bear, M/Y Vogue, S/Y Helios, S/Y Athos, S/Y Destination, Kalikobass II, M/Y Te Manu.
Languages: English, basic Spanish

CHEF: Rose-Marie (Romy) Hunt – British
Joined Spring 2019
Romy joined yachting as a skilled beauty therapist and masseuse, and before long found herself in a sole stewardess role, while accumulating several thousands of nautical miles.
In her 8 years in the industry, she has crossed the Atlantic Ocean several times and experienced cruising the Caribbean and the Mediterranean including Greece and Turkey. The transition from stewardess to chef followed the completion of a course at The Ashburton Chefs Academy and she found the new challenge fitted well with her confident and energetic character. Romy loves experimenting with food and the fusion of flavours and is adept in Italian, Asian and Mediterranean cuisine.
Romy’s interests include yoga, reading, swimming, photography ..oh and food!!
Previous Yachts: S/Y Julie Marie (40M), S/Y Ningaloo (43M), S/Y Bayesian (56M)
Languages: English, Spanish (fluent)

STEWARDESS: Lauren Murchison – Australian
Joined Spring 2019
Lauren is new to yachting but her enthusiasm of the sea and love for sailing started at a young age, growing up in a family of sailors.
Pair this with her extended experience in tourism and high-end hospitality, and Laurens future career in the yachting industry looks rosy!
Her positive attitude and her willingness to learn and share, make Lauren an strong team player and her cheery dynamic personality mean she is always ready to help her fellow crew members.
Lauren likes to keep busy in her spare time with activities such as hiking & camping, yoga, dressmaking and of course water sports.
Languages: English

CHIEF ENGINEER: Andy Feeney - British
Joined Spring 2017
After graduating with an honours degree in Mathematics in 2004, followed by working as a business insurance underwriter for 2 years, Andy decided to make a move to Palma to learn how to teach English as a foreign language.
Working and living in Barcelona for a year he returned to Palma and started his yachting career on the iconic sailing yacht “CREOLE” and has never looked back. With plenty of sailing and racing experience all over the Mediterranean and Caribbean he brings a wealth of knowledge to Alexa. In 2011 Andy decided to pursue engineering and is currently working towards his Y4. Andy lives in Mallorca with his girlfriend and baby boy, Aaron.
Previous yachts: S/Y Creole, S/Y Nephele, M/Y Benita Blue, S/Y Anemos
Languages: English, Spanish

MATE/DECKHAND: Diego Lima Corujo – Uruguay
Joined Spring 2019
After owning and running his own yacht in and around the waters of Costa Rica, Diego ventured over to Palma de Mallorca to start a new career as a professional yachtsman. His first experience was on board S/Y Alexa of London, where he fitted in well with the crew over a busy summer season.
Over the past 9 years he has gained experience on different yachts in different roles and has regularly “moon lighted” on Alexa, whilst cruising the Balearics. Diego’s easy-going conscientious character makes him a vital member of this vibrant crew of 5!
He loves an active lifestyle and when he’s not on board, Diego enjoys activities such as surfing, mountain biking, running and reading.
Previous Yachts: S/Y Clan VIII, M/Y Cincuenta, S/Y Polar Bear
Languages: Spanish, English 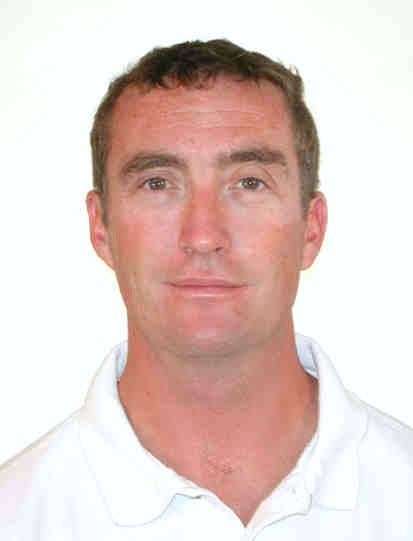 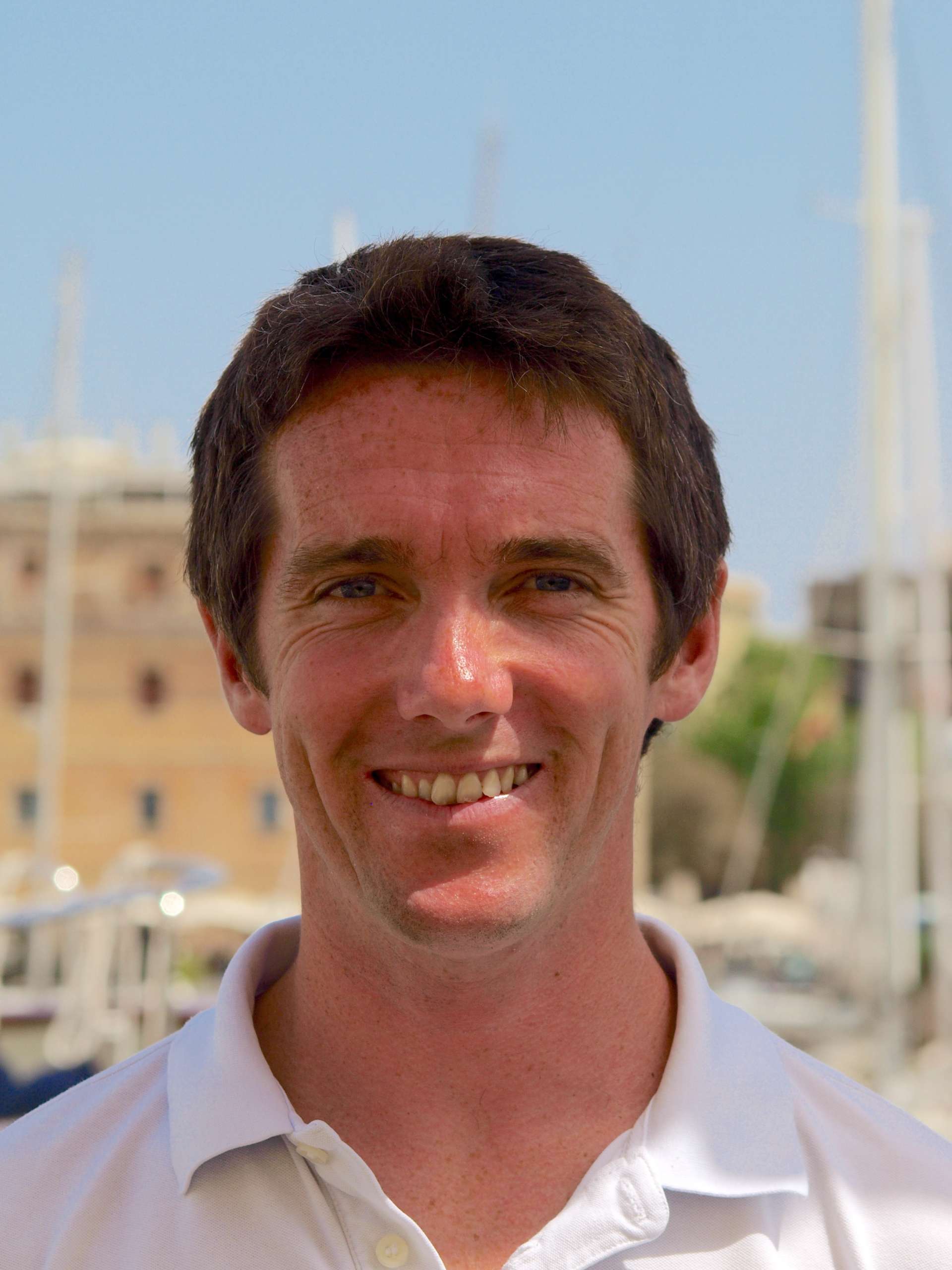